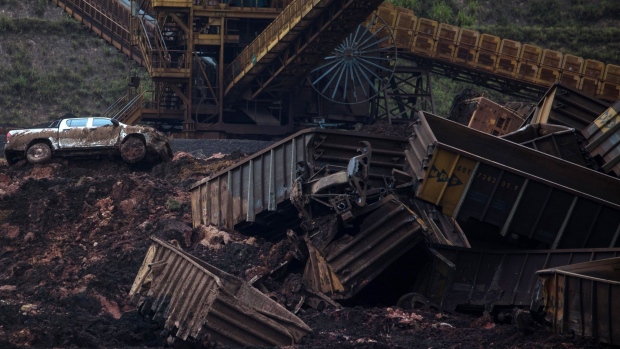 Relatives and friends attend the burial of a victim after the dam collapse in 2019. , Bloomberg

(Bloomberg) -- Iron-ore giant Vale SA is considering the use of remote-controlled trains near a tailings dam that Brazilian authorities say risks collapsing and getting workers buried.

It would take around 60 days for Vale to implement the solution, according to a person familiar with the plan, who asked not to be named because they’re not allowed to discuss it in public.

“Vale is studying alternatives for the circulation of trains in the region for the flow of its production and that of third parties,” the Rio de Janeiro-based company said in response to questions.

The world’s second-largest iron-ore producer has grappled with the fallout from two deadly dam collapses over the past six years, spending billions of dollars in compensation to the families of victims. The disasters have also led to production cutbacks.

Authorities in the southeastern Brazilian state of Minas Gerais have restricted circulation near the Xingu dam and said it runs the imminent risk of rupture, which the company disputes. Residents had already been evacuated, but workers remained in the area, leading labor officials to intervene last month.

Vale is trying to reverse the restrictions, arguing the structure is not at risk of caving in.

Remote-controlled trains would be one way around the problem, according to Marcos Henrique da Silva Jr., an auditor at the Regional Labor Superintendence of Minas Gerais who was involved in the dam’s inspection. He stresses the priority is to preserve lives. The collapse of the company’s Brumadinho tailings dam, also in Minas Gerais state, killed 270 in 2019.

Engineering solutions to improve the safety of the dam itself would probably take much longer to be implemented. Vale’s request for a partial suspension of the restrictions is under analysis, Silva said.

The restrictions on circulation near the dam could also potentially affect a Gerdau SA steel plant that receives coal through the railroad.

Gerdau said its steel production on the site has not yet been affected thanks to its coal stockpiles, but it’s monitoring the situation carefully.

The use of remote-controlled trains is not unprecedented. After the collapse of the Brumadinho dam, railway company MRS Logistica SA developed an autonomously operated locomotive system to keep loading iron ore for Vale in the area. Vale is one of MRS’s main shareholders.

While expensive, the solution would be less harmful for the company than a protracted halt of iron ore shipments.