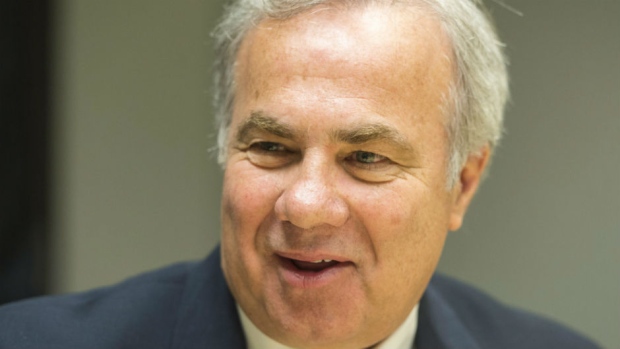 Joseph Papa, CEO of embattled drug maker Valeant Pharmaceuticals (VRX.TO), was paid US$62.7 million in cash and stock last year and could earn a bonus of more than US$500 million if he gets the company’s stock back above its pre-crash heights.

Papa was paid a salary of US$980,769 and bonus of more than US$9 million, which included an US$8-million signing bonus when Papa was appointed to the top job last year. Papa was also granted US$10 million in stock options, US$12 million in restricted share units and 933-million performance stock units (PSU) that have a current value of nearly US$30 million.

Those PSUs could skyrocket in value if Papa restores Valeant to its former stock market valuation. If Papa pushes Valeant’s stock above US$270 per share by 2020 he will be awarded more than 1.8 million in performance share units worth about US$500 million.

Valeant’s stock plunged 57.3 per cent in 2016 from the day Papa assumed the role of chairman and CEO on May 3.

The compensation package could encourage engaging in risky behaviour to try to hit those aggressive stock price targets, Richard Leblanc, a governance advocate and professor at York University told BNN.

“It’s a large amount of money. It’s insanely large,” said Leblanc. “That type of extreme activism at a Canadian company can actually promote fraud, and that’s exactly what happened at Valeant”

Valeant is no stranger to big incentive compensation packages that could create potential stock-based jackpots for company executives.

Former Valeant CEO Michael Pearson could have seen a potential payday worth more than US$2.6 billion had Valeant’s stock hit big milestones.

Pearson did not reach those goals and left the company last year. The Quebec-based drug company was once Canada’s most valuable company with its stock trading at more than US$255 in July, 2015. The company’s stock has cratered amid allegations of drug-price gouging, improper accounting and even fraud. Investors are worried about the company’s ability to pay its mounting debt and the stock now trades at just under US$11 per share.

Pearson was ousted from the corner office in March last year just before Papa was hired.  Pearson received a US$9 million severance payment and the company agreed to pay him US$83,333 a month this year as a consultant until the end of the 2016 and US$15,000 per month for consulting services until the end of 2017. Valeant terminated that agreement in January for unspecified reasons, according to the proxy statement.

Earlier this month, activist investor and Valeant booster Bill Ackman announced he was selling his stake in the company. Ackman’s hedge fund, Pershing Square Capital Management, lost an estimated US$4 billion on the investment. 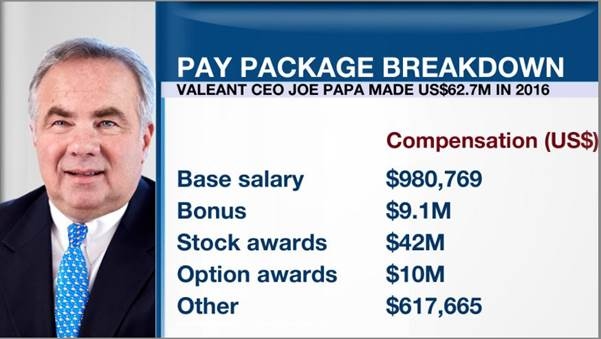