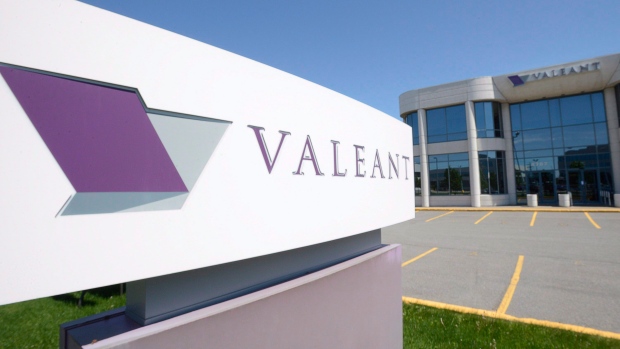 The head office and logo of Valeant Pharmaceuticals are pictured in Montreal on Monday, May 27, 2013. , THE CANADIAN PRESS/Ryan Remiorz

LAVAL, Que. - Shares of Valeant Pharmaceuticals Inc. are up nearly six per cent after the company announced it has completed the sale of its iNova Pharmaceuticals business for US$930 million in cash.

The Quebec-based company says it will use net proceeds of about $920 million from the sale to reduce its debt.

CEO Joseph Papa said the sale of iNova to Pacific Equity Partners and the Carlyle Group is also part of Valeant's efforts to simplify its portfolio and focus on its core businesses.

Valeant shares have plunged since questions about its business model first emerged two years ago, when they traded for more than $300 per share.

The company has since faced a string of lawsuits, including one from its former chief executive, as well as swelling debt levels, losses of more than US$2.4 billion and scrutiny over its drug pricing practices.

Following the anticipated closure of the sale of its Obagi Medical Products business this year, Valeant says it expects it will exceed its August 2016 commitment to pay down $5 billion in debt before February 2018.