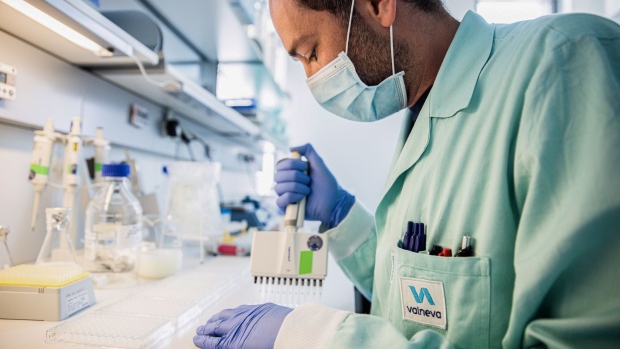 A lab technician wearing a protective face mask uses a multichannel pipette dropper during the antigen quantification process of the coronavirus vaccine research at the Valneva SA laboratories in Vienna, Austria, on Thursday, Aug. 6, 2020. The U.K. has signed agreements to buy 90 million doses of vaccines in development by drugmakers including Pfizer Inc., BioNTech SE and Valneva SE, joining countries around the world racing to secure supplies of protection against Covid-19. , Bloomberg

(Bloomberg) -- Valneva SE, the French company that raced to develop a Covid shot only to find that others beat it to the punch and potential buyers were no longer interested, received another blow on Thursday: even the local regulator won’t clear its shot.

France’s Haute Autorite de Sante approved another latecomer from Sanofi and GSK Plc but said it didn’t know how well the Valneva vaccine worked on the latest variants or how it stacked up against other products.

The French ruling runs counter to the European Medicines Agency’s recommendation and likely represents the final nail for the product’s coffin. Valneva has all but abandoned its coronavirus immunization efforts, saying earlier this week it would only sell the remaining inventory. It’s working on experimental vaccines for Lyme disease and chikungunya, a mosquito-borne illness.

The HAS decided against clearing the Valneva shot as a primary form of Covid immunization, while approving the Sanofi injection and another one from Novavax Inc. as boosters.

Valneva’s stock, after having dropped about 74% so far this year, showed little change in Paris trading.