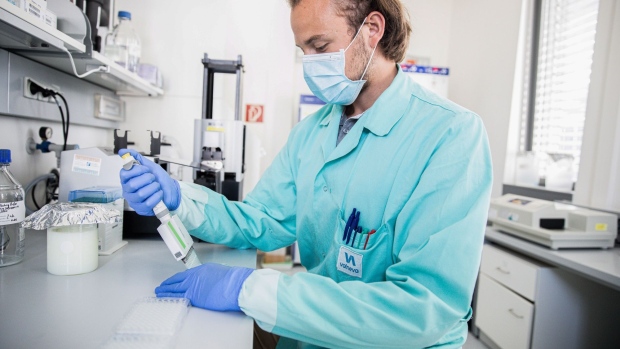 A lab technician wearing a protective face mask uses a multichannel pipette dropper during the antigen quantification process of the coronavirus vaccine research at the Valneva laboratories in Vienna. , Bloomberg

The development comes as the company expects to get the green light from regulators in Europe and the U.K. this quarter. The company has an order to deliver up to 60 million doses to the European Union. An earlier contract worth up to 1.4 billion euros ($1.6 billion) with the U.K. government was cancelled last year after the British government said the company had breached its supply deal.

These results show “ability to address currently circulating variants of concern,” Juan Carlos Jaramillo, Valneva’s chief medical officer said in a statement. “We continue to believe that VLA2001 could be an important component of the fight against Covid-19.”

The Valneva shot uses an inactivated version of the virus to stimulate an immune response. It’s the only Covid vaccine using that tried-and-true technology to reach advanced trials in the U.S. and Europe.