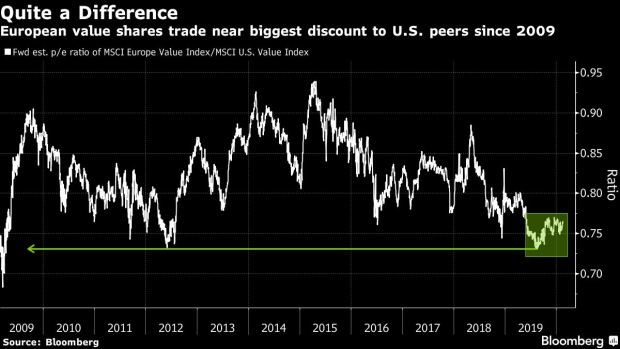 Such shares rebounded on both sides of the Atlantic in February. The MSCI Europe Value Index is up 4.9%, ahead of a 3.4% gain for the MSCI U.S. Value Index. And while American stocks with lower valuations are lagging growth peers, the performances of the two are neck-and-neck in Europe.

It doesn’t hurt that European value stocks trade near the biggest discount to their U.S. peers since 2009 on a price-to-earnings basis, capping four years of underperformance. On top of that, signs of an economic recovery in the euro area and a rally in banking shares are fueling investor preference for the region’s equities with lower valuations.

“European macro data were better than expected, although still weak, but improving manufacturing and services PMIs are leading investors into the reflation trade,” said Alberto Tocchio, chief investment officer at Colombo Wealth SA in Lugano, Switzerland. “Overall, the European earnings season has been better (more surprising) in Europe than the U.S., and this definitely helped support valuations and multiples.”

Optimism that China is managing the coronavirus epidemic and that the impact on global growth won’t be drastic has spurred a renewed hunt for risk assets in February, pushing the MSCI Europe Value Index to the highest level since July 2018.

Euro-area manufacturing data this month slightly exceeded an initial estimate, reinforcing views that the year-long factory slump that hobbled the region’s economy is finally coming to an end.

The Stoxx Europe 600 Banks Index has rallied 9.3% in February, poised for the best month since February 2015. Commerzbank AG is the best performer with a 27% jump this month after its fourth-quarter revenue beat estimates. Deutsche Bank AG is a close second with a rise of 24% following the news that Capital Group, the $2 trillion fund manager based in Los Angeles, is a shareholder in the lender.

“The buy-the-dip mentality focused on those sectors where positioning was less stretched,” said Tocchio.

To contact the editors responsible for this story: Blaise Robinson at brobinson58@bloomberg.net, Namitha Jagadeesh, Jon Menon