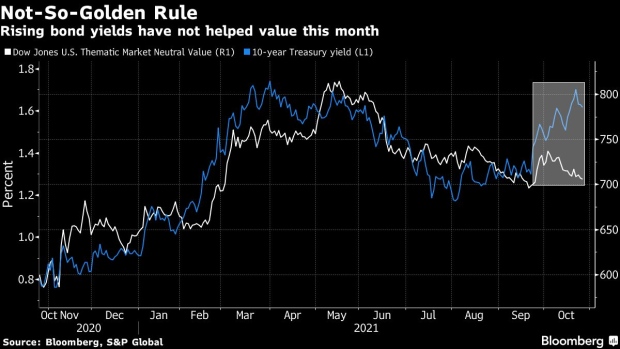 (Bloomberg) -- Value investing is losing again -- and hedge funds have less ammo to save it this time round.

Over the past year, the supposedly slam-dunk trade in the economic reopening has followed a simple rule: When yields rise, value wins. That hasn’t worked out this month even as benchmark 10-year Treasury yields rose near their peak levels of 2021. The systematic strategy of buying companies that look cheap while selling their expensive peers has lost 2% in a Dow Jones market-neutral index.

One potential reason for the underperformance: Hedge funds have recently pared back exposures to the value factor after loading up on bets last month, per data from JPMorgan Chase & Co.’s prime brokerage.

All that means there’s no sign the systematic investing style is about to resume its long-hoped-for comeback since peaking in May, even as other risky trades boom across Wall Street.

“While there’s still room for HFs to get more long (or less short) value, the set-up does not appear nearly as extreme as it was earlier this year,” the team led by John Schlegel wrote in a note this week.  Value shares trade at a discount often because they are seen as riskier. These businesses offer more cash flows in the near-term -- a low-duration trade that typically outperforms when rates are rising.

It all makes October’s stock moves all the harder to square. Bearish forces have been weighing on Treasuries on speculation the Federal Reserve will hike rates earlier than expected. At the same time cyclical sectors like energy, consumer discretionary and materials have topped the S&P 500. Yet for all that, global value stocks still lag growth names in MSCI indexes.

JPMorgan’s data suggests hedge-fund flows into value have reversed recently after rising last month, with quant managers’ net exposure already about one-third beneath peak levels notched earlier in 2021. Long-short funds still prefer growth to value, though the gap in positioning has tightened to the lowest in recent years.

For proponents with a longer-term view, there’s still good reason to stick with value since the factor is trading near a historic discount to the priciest shares.

At the same time, recent market divergences are opening up opportunities in a slew of cheap industries, JPMorgan’s equity strategists led by Mislav Matejka said in a separate note this week. For instance, energy and mining shares have lagged the rallies in commodity prices. Meanwhile, banks have not bounced back as much as market-derived inflation expectations, even though the two tend to move in tandem.

“Cyclicals and value have a chance to continue moving higher, along with rising bond yields, as long as investors are pricing in a more sustained upcycle, where tail risks continue receding,” the team wrote.