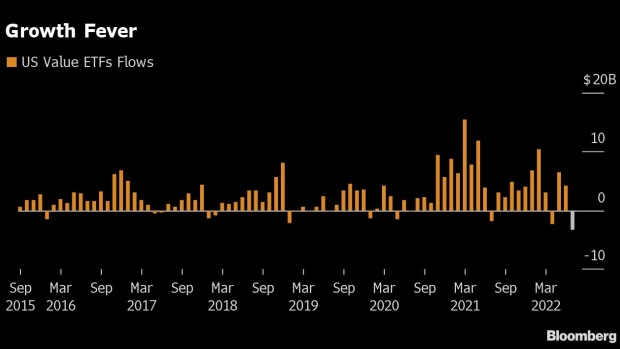 A trader works on the floor of the New York Stock Exchange (NYSE) in New York, U.S., on Tuesday, Sept. 7, 2021. Equities retreated from near-record highs as U.S. trading resumed after the Labor Day holiday. , Bloomberg

(Bloomberg) -- If Wall Street is right, the big revival in value investing in the post-pandemic era is in danger of falling apart all thanks to the resurgent bond market.

Strategists from JPMorgan Chase & Co. to Wells Fargo & Co. warn that the best days may now be over for cheap-looking stocks as investors dump the likes of oil producers and banks on the conviction that inflation has peaked.

With traders wagering that an economic slowdown will cool historic price pressures, a long-short value trade has dropped 13% since the mid-June high point in bond yields.

At the same time, companies touted for their above-average potential to expand profits, known as growth stocks, outperformed their value counterparts by the most in 22 years in July, MSCI indexes show, after Big Tech names from Apple Inc. to Amazon.com Inc. rebounded.

And for the first time in two years, a majority of investors polled by Bank of America Corp. in early August said value will trail growth going forward -- just months after the former was favored the most in more than a decade.

“The macro trends are very favorable longer term for the growth style,” said Christopher Harvey, head of equity strategy at Wells Fargo in an interview. “Value typically performs better leaving a recession and into a recovery due to its balance sheet and operating leverage.”

All this skepticism is quite the turnaround for one of the hottest trades on Wall Street in post-pandemic markets -- and defies reams of quantitative research that says the link between rates and value is far from consistent historically.

No wonder systematic investors like Cliff Asness warn those snubbing the investing style in a knee-jerk response to falling yields are getting sucked into a “misleading” theory that there’s a simple -- and direct -- relationship between the two.

For now the skeptics have it, with $3.3 billion flowing out of US exchange-traded funds tracking value stocks in July, according to data compiled by Bloomberg Intelligence. Meanwhile, growth funds have added $5.4 billion in August, after a $3.8 billion haul last month.

“Should one go back into value style? Not yet,” JPMorgan strategists led by Mislav Matejka wrote this week. “The key is the direction of long yields.”

The conventional wisdom holds that value stocks like Exxon Mobil Corp. and Berkshire Hathaway Inc. tend to be more cyclical and offer near-term cash flows, while growth shares like tech are prized for their long-term prospects. Growth stocks are considered larger beneficiaries of falling bond yields because their valuations and expected cash flows are heavily influenced by interest-rate changes.

But despite the fastest US monetary tightening since the 1980s, bond yields have fallen from their peaks -- spurring a rotation out of cheap stocks.

JPMorgan says the growth factor may keep winning as the latest data suggest the economy is slowing, but Societe Generale SA’s Andrew Lapthorne isn’t so sure.

“Not only are central banks not there to backstop markets as they have been in recent years, but growth stock profits are proving somewhat fragile as well,” the global head of quant strategy wrote in a recent note.

One tell-tale sign that growth firms are more vulnerable to the current economic slowdown: The group in the S&P 500 is expected to see profits falling almost 1% this year, compared with an expansion of 10% for its value counterpart, analyst estimates compiled by Bloomberg Intelligence show. The weakness partly reflects the robust growth enjoyed by internet and software companies during the pandemic lockdowns, and helps explain why the style has been more volatile this year.

The value-versus-growth question is critical for quants, who have mounted a spirited comeback since 2021 in a market less obsessed with tech darlings amid historic inflation.

In part thanks to a slant toward value equities, 60% of quants beat their benchmark in the first half of this year, compared with 39% of active funds, Nomura Holdings Inc. data show. Among hedge funds, they are up 6% this year, versus an average 4% loss in the industry, according to prime-brokerage data from Goldman Sachs Group Inc. through July.

To the likes of Asness, co-founder of AQR Capital Management whose Equity Market Neutral Fund is up 13% this year, cheap stocks can still outperform wherever rates go. His calculations show there’s no consistent relationship between yields and value-growth over the long haul, echoing previous research from GMO LLC and Robeco.

“Long-term there is very little evidence that the return of the value factor is anything other than trivially correlated to changes in interest rates,” Asness wrote in a blog post last week.