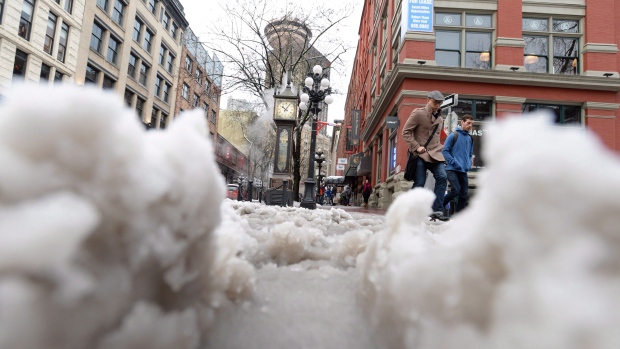 Pedestrians cross a snow-covered street in Vancouver , The Canadian Press

A brutal blast of winter weather didn’t just cause chaos for commuters in Vancouver last month. It also intensified the chill across the city’s real estate market.

Sales in the once white-hot housing market plummeted 41.9 per cent year-over-year in February as 2,425 properties traded hands, according to new data from the Real Estate Board of Greater Vancouver.

Vancouver was battered by relentless snowfall in early February, starting on the third day of the month when a storm brought 12 centimetres. By February 7, there was 20 centimetres of snow still on the ground, according to Environment Canada data.

“While home sales are not happening at the pace we experienced last year, home seller supply is still struggling to keep up with today’s demand," Morrison added. "This is why we’ve seen little downward pressure on home prices, particularly in the condominium and townhome markets.