To understand why inflation is running so hot, look to Canada’s West Coast. Vancouver, the home of one of North America’s busiest ports, is bursting at the seams.

The vacancy rate for space in the city’s warehouses has fallen below 1 per cent, according to data from real estate advisory Altus Group Ltd. Industrial rents are soaring and so are land values -- if you can find any land to buy, that is. The average home is $1.4 million (US$1.1 million) and developers are eager for new places to build.

It’s so hard for firms to find space that goods destined for Vancouver are sometimes brought in through the port and sent about 660 miles (1,160 kilometers) east, to Calgary, where they’re stored before being shipped back again.

“Industrial space has now been infected with the same disease as houses,” said Murray Mullen, chief executive officer of one of Canada’s largest trucking and logistics firms, Mullen Group Ltd. Companies that are renewing industrial leases will, in some cases, be paying double what they were before, Mullen said. 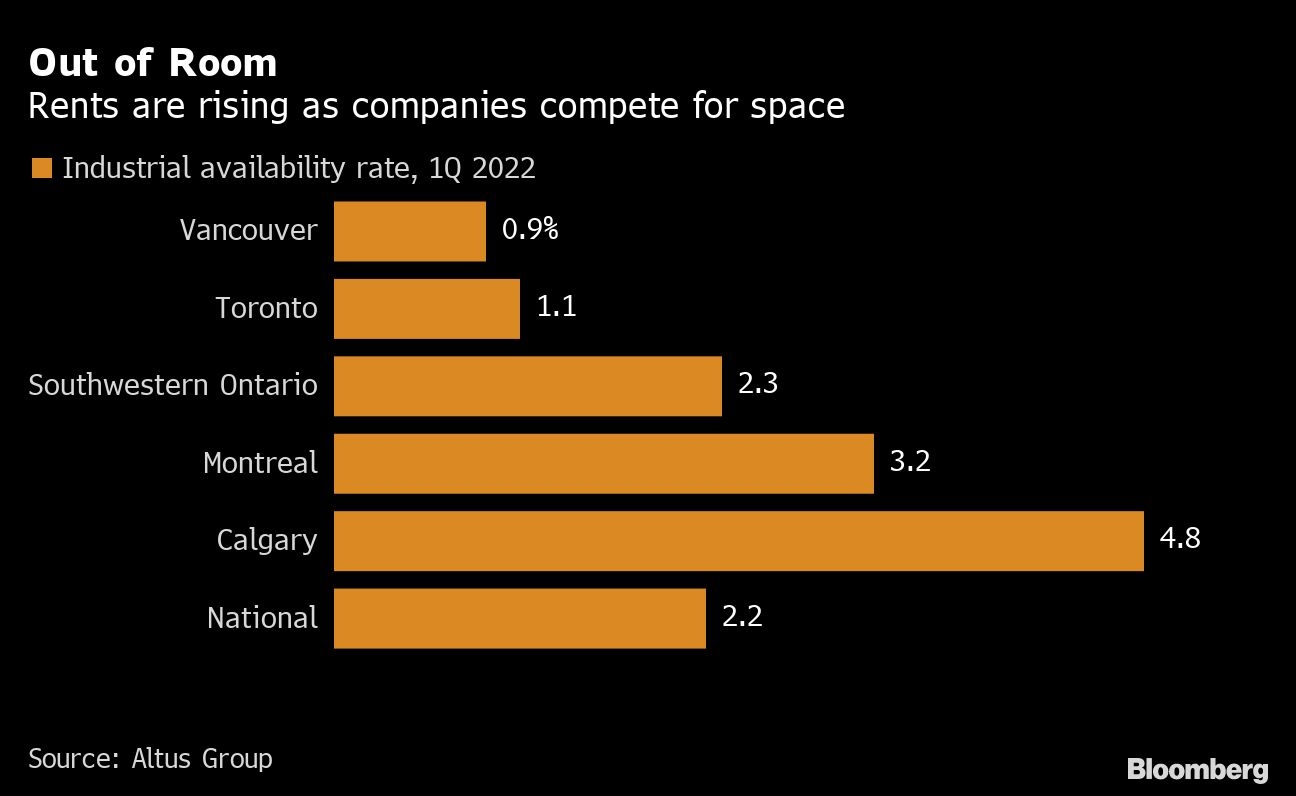 Overall leasing costs for industrial real estate have increased 40 per cent in Vancouver in three years to an average of about $17.40 per square foot, according to Altus data. They’ve risen 40 per cent in Toronto as well, and industrial land prices in some of the suburbs immediately around Canada’s largest city have jumped to more than $2 million an acre -- beyond even Vancouver levels, the firm says.

“I’m a little bit concerned about where the rents are and whether or not some of those tenants will be able to absorb the higher rent, especially if they want to try to remain in the same area,” Raymond Wong, Altus’s vice president of data operations and data solutions, said in an interview.

The proximate cause of the ultra-tight industrial market is the boom in demand for online shopping and the kinks in the supply chain that have formed as a result of COVID-19, war in Europe and other disruptions. Those problems have encouraged retailers and manufacturers to order goods “one cycle ahead,” Mullen said, building up inventories as insurance against future factory slowdowns or transportation bottlenecks.

Some companies are responding to the higher prices and lack of availability by seeking land and space far from the major cities, in places such as London, Ontario, about a two-hour drive southwest of Toronto. Still, some of those markets are now getting tight, too.

Meanwhile, the distance from the biggest population centers brings its own cost pressures, especially given high fuel prices. “There’s only so far you can go, because the other issue is labor,” Wong said. “It would be great if you can locate 100 kilometers away, but then how are you going to get people to actually operate your building?”

That’s a growing problem in a country that has long since recovered all of the jobs lost in the COVID-19 recession of 2020. Canada has an unemployment rate of 5.3 per cent, the lowest in monthly records dating back to 1976. In a recent Bank of Canada survey, a record 81 per cent of businesses said they would have trouble meeting an unexpected increase in demand.