When Parq Vancouver, a glimmering waterfront casino, opened amid much to-do in late 2017, few would’ve anticipated that a dirty money crackdown was about to throw the city’s roaring gambling business into turmoil.

Vancouver-area casinos for years had been accepting millions of dollars in questionable cash from gamblers showing up with suitcases and hockey bags bulging with bills, according to British Columbia Attorney General David Eby. But new rules implemented last year to more tightly identify sources of funds have put a damper on that rollicking trade.

“The anti-money laundering regulations in British Columbia have been a problem," says Andrew Hood, a Toronto-based equity analyst at M Capital Partners Inc. who covers Dundee Corp., one of Parq’s two owners. “The regulations were supposed to cut down on illicit gambling but, of course, that hurt volumes across casinos."

For Parq, one of the province’s largest-ever private developments, the clampdown came at a delicate time. The plan was to replace costly construction financing with cheaper debt after opening but business picked up slower than expected amid the new restrictions. It lost nearly $153 million ($114 million) in 2018, according to a March 28 Dundee filing. Now Parq’s in a race to refinance debt in order to make an interest payment this week on a second-lien loan, according to S&P Global Ratings.

Parq Holdings LP has a $150 million second-lien term-loan that was arranged by a syndicate of financial institutions led by Credit Suisse Securities in 2014, according to data compiled by Bloomberg. The amount of interest isn’t disclosed, but Parq had deferred an interest payment by one month to April 30 and its ability to pay hinges on the company refinancing its debt, S&P said earlier this month when it downgraded Parq Holdings LP to CCC, eight notches below investment grade, from B-.

"We still believe that, absent a debt recapitalization, the company will be unable to materially address its high fixed charges and financial sustainability," S&P said, adding there’s a risk of a payment default or a debt restructuring within the next 12 months. 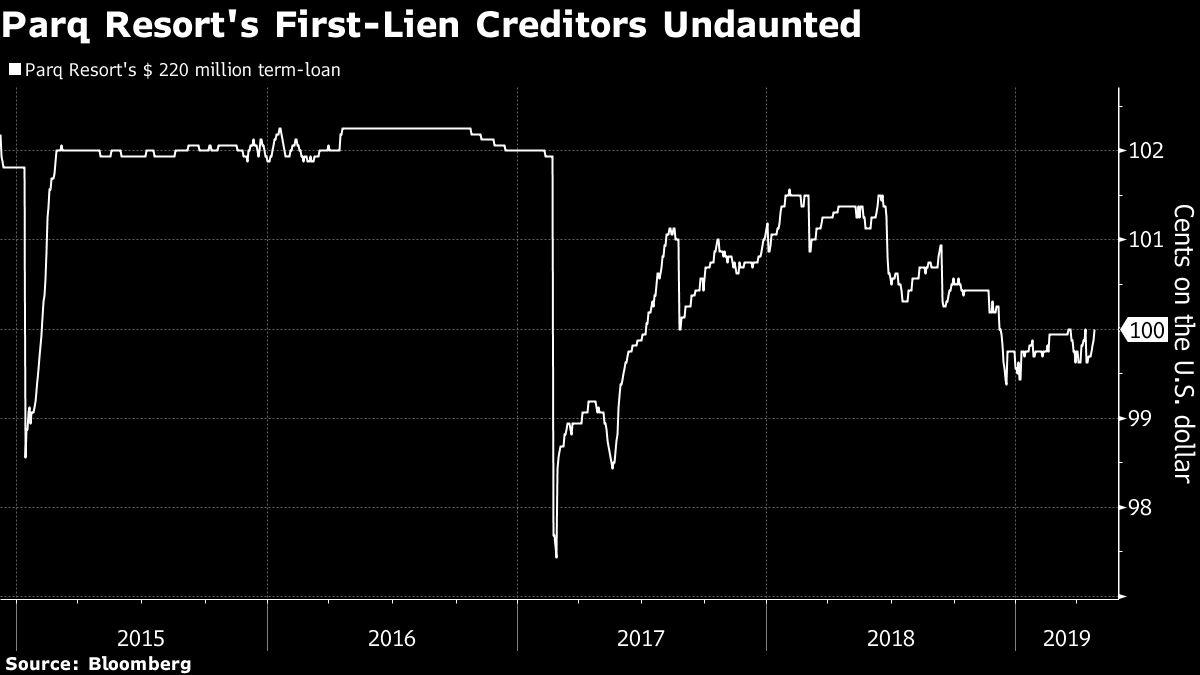 Privately held PBC Group, an Ottawa-based real estate developer, is the majority owner of Parq with 63 percent. Dundee, a Toronto-based public holding company with investments in agriculture, resources and real estate, owns the remainder. PBC and Dundee declined requests to be interviewed for this story.

Parq’s $220 million first-lien term-loan due in December 2020, which would be paid first in the event of a default, is down just one percent over the last 12 months, according to Bloomberg data. That may be because creditors believe Parq’s assets are worth more than the loans -- the resort generated C$43.5 million in revenue in the three months ended Dec. 31, up 36 percent from the same period in 2017, according to disclosures by Dundee. Interest on its senior debt hovers around 10 percent at $22 million a year.

If not for its untimely launch, Parq would’ve seemed a sure bet in a city that’d become a magnet for wealthy Asian high rollers known to drop more than C$500,000 -- source undeclared -- at gaming tables.

The shimmery copper-hued casino-cum-hotel complex finally offered an upscale option in downtown Vancouver with a second-floor entrance leading directly into the neighboring BC Place stadium -- on opening night, VIPs waltzed across for a Coldplay concert.

Parq was everything its kitschy rivals with their all-you-can-eat buffets in the suburbs were not: its understated decor was bathed in natural light, its elevated outdoor park boasted 200 real pines unlike the copses of fake trees at the busy River Rock Casino Resort near the airport. Its fine dining options included tea buds painted in gold. It’s two luxe hotels in one: a 329-room JW Marriott and the boutique-styled Douglas with 188 rooms.

Vancouver had also appeared a uniquely promising market. "The revenues in Vancouver have grown consistently within the past 10 years; pretty much every other market has not seen a raise in table revenues," Scott Menke, chief executive officer of Paragon Gaming Holding Co., the Las Vegas-based casino developer and operator that spearheaded Parq’s construction, told Bloomberg News ahead of its opening in 2017. Paragon abandoned the underperforming asset in February this year, selling its stake to PBC.

British Columbia Premier John Horgan’s government has been spearheading Canada’s anti-money laundering charge, and its hiring of an independent investigator to probe the gambling industry coincided almost to the day with Parq’s ill-timed opening in September 2017.

Explosive details have filtered out: at Great Canadian Gaming Corp.’s River Rock, dubbed the "epicenter" of hot money by the investigator, C$13.5 million in 20-dollar bills had been accepted in a single month in 2015 and couriers were delivering cash to patrons in late-night drop offs. In another instance, a gambler was permitted to convert C$3.1 million, mostly in twenties, into chips at Gateway Casinos & Entertainment Ltd.’s Starlight Casino.

In January 2018, the government-owned British Columbia Lottery Corp., responsible for managing casinos in the province, hastily implemented new measures requiring gamblers to provide a bank receipt on the source of funds for any buy-ins amounting to C$10,000 or more within a 24-hour period. It also hired Ernst & Young to audit three years of transactions at River Rock but concluded in February that "there was no systemic pattern of money-laundering activity."

Be that as it may, gambling at River Rock isn’t the roaring business it once was either -- the anti-money laundering measures appear an irritant to patrons.

"The changes in procedures were implemented extremely, extremely quickly," Great Canadian Gaming Chief Executive Officer Rod Baker told investors on a call last May. "I think it’s even more challenging for our guests when they’ve been used to doing things a certain way for a certain amount of time, and then all of a sudden, you know, they get turned away and they got to figure out – they got to go to the bank that day."

The company reported last month that table drop -- the amount of money patrons used at tables to buy chips -- fell 16 percent in 2018 to C$298 million at its 10 properties in British Columbia, driven by a decline at River Rock. Revenue from British Columbia also dipped 3 percent due in part to the new source-of-funds procedures, it said.

Meanwhile, Dundee has said it’s seeking to bring in a new partner to Parq by Tuesday. All told, investors had pumped more than C$1 billion in long-term debt and equity into Parq by the end of 2018, according to filings. Dundee, which put in C$142 million of that, has said it doesn’t expect to fully recover its investment and that it could take another year or two before Parq is closer to stable operations.

"They don’t necessarily think they’re going to get their money back," said Hood. "But they do think that they’ll get a substantial portion back and that’s why they don’t just give up and sell it."