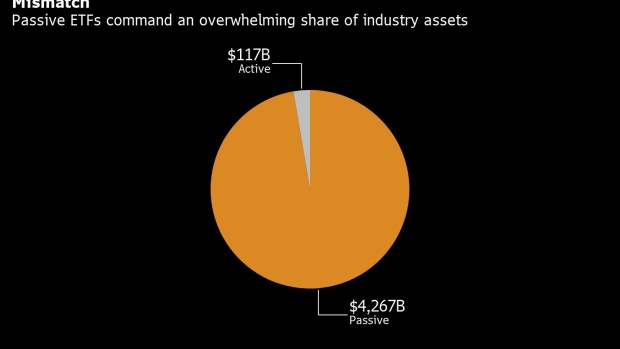 (Bloomberg) -- It’s one of the hottest innovations on Wall Street, the potential key to luring trillions of actively managed dollars to the booming market for exchange-traded funds. Yet two of the industry’s biggest players want no part of it for now.

Known as ANTs, these products come with many of the benefits of traditional ETFs but drastically reduced disclosure requirements, making them a likely conduit to bring stock-picking strategies to the exchange-traded universe.

Already the market’s largest player, BlackRock Inc., has filed to use the structure after the first such funds launched in April. JPMorgan Chase & Co. -- which also plans its own ANTs -- estimates non-transparent ETFs could ultimately command more than $7 trillion in assets.

For all that, Vanguard is in no rush to wade into untested waters, according to its head of ETF product management.

“This is an opportunity for us to learn from what others are doing,” Rich Powers said in an interview. “Investors make their way to great active strategies, regardless of whether it’s first to market.”

So far, it seems they have yet to flock to ANTs.

After being in the making for almost a decade, six non-transparent ETFs have launched to date from three issuers: American Century Investments, Legg Mason Inc. and Fidelity Investments. Five follow large-cap equities and one tracks mid-cap stocks.

Collectively, they have attracted almost $240 million in assets, with the $133 million American Century Focused Dynamic Growth ETF leading the pack. Performance is mixed: Half of the new products are handily beating their benchmarks, two are lagging, and one is neck and neck.

In the eyes of State Street’s Rory Tobin, there are two big hurdles to attracting investors to this new type of fund. First, the sheer dominance of passive strategies, which account for more than 95% of all U.S. ETF assets. Second, the relative cost of the ANTs.

“You’ve got your investment proposition, you’ve got your ETF mechanics, and then there’s the economics,” said Tobin, global head of State Street’s SPDR ETF business. “How do investors feel about the price point at which these are being positioned?”

The average expense ratio for the new non-transparent funds is 0.52%. By comparison, the world’s largest ETF -- State Street’s SPDR S&P 500 ETF Trust, ticker SPY-- has a fee of less than 0.1%.

For some market watchers, the question of demand runs even deeper than cost. Ben Johnson at Morningstar Inc. reckons all the hype around the non-transparent structure has been driven by issuers rather than investors.

“What has been absent is any clear indication of demand,” said the director of global ETF research. “This is a solution in search of a problem, and the problem that ANTs solve is chiefly in my mind an asset management problem.”

Nonetheless, issuers remain optimistic. Greg Friedman, head of ETF management and strategy at Fidelity, said the firm expects growth for its products over time, with large institutional investors coming on board once the funds have a track record.

American Century said it had interest from “a lot of different parties,” and pointed out that it successfully launched almost at the height of this year’s market stress.

“Almost no one was launching ETFs, and almost everyone was pulling theirs back,” said Edward Rosenberg, head of ETFs at American Century.

That kind of perseverance may well pay off in the long run, since the ETF ecosystem has a track-record of delivering a first-mover advantage.

A spokesman for Legg Mason didn’t immediately respond to a request for comment.

The new funds reveal their holdings just once a quarter, as opposed to the daily disclosures done by a regular ETF.

That’s an alluring prospect for mutual fund managers confronting the ongoing march of cheaper, easier to access passive products. They can adopt similar structures while shielding their secret sauce from front-running or replication by rivals.

But lingering questions about how the structure will hold up during times of market stress are keeping asset allocators such as E*Trade Financial’s Mike Loewengart at bay.

The share price of a traditional ETF normally stays in lockstep with the value of their underlying holdings thanks to specialized traders known as authorized participants, who step in to capitalize on any price discrepancies and keep the two moving in tandem. With an ETF that conceals its holdings, that process looks a bit different.

Most ANTs launched so far use the so-called ActiveShares model from Precidian Investments. The structure publishes an indicative value every second to help traders make a price and enlists an agency broker -- known as an authorized participant representative -- to confidentially buy and sell securities for the APs.

“It hasn’t really been tested yet,” said Loewengart, the managing director of investment strategy at E*Trade. “They need to become more seasoned.”