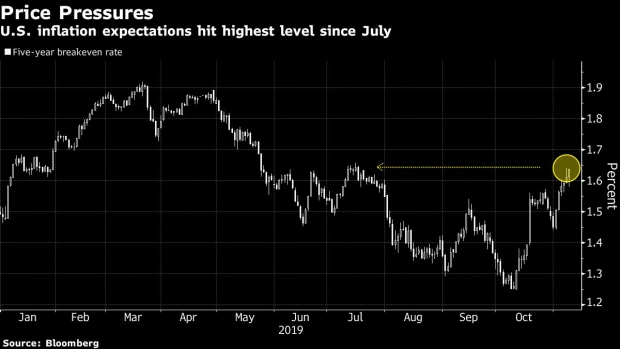 (Bloomberg) -- The bond market may be about to get confirmation of its rebounding inflation wagers, according to Vanguard Group Inc. strategist Anne Mathias.

The $5.6 trillion asset manager is among proponents of the view that market-based measures of inflation expectations will extend their climb from a three-year low. Potential progress in U.S.-China trade negotiations has been a key contributor, along with the Federal Reserve’s signaling on Oct. 30 that it would need to see a significant pickup in inflation before lifting rates.

Five-year breakeven rates -- a proxy for anticipated annual increases in consumer prices into 2024 -- touched a four-month high of 1.64% last week, with nominal yields surging as well. Developments on the trade front aside, bond traders’ bearish shift may now hinge on inflation data to be released this week.

“The market consensus has really started to believe that the Fed’s not going to combat inflation,” Mathias said. Breakevens are headed higher because of “a combination of the U.S. economy and an underlying thematic view that trade tensions will at least not get worse.”

The next signpost for breakeven believers is Wednesday’s consumer price report. It’s forecast to show that core inflation remained near the highest level since 2008 on an annual basis. Mathias expects a strong reading could help boost five-year breakeven rates to 1.7%, the highest since May.

Bond traders will also get the latest economic assessment from Fed Chairman Jerome Powell, who speaks to Congress on Wednesday and Thursday. Powell hinted at pausing rate cuts after the central bank’s third consecutive easing at last month’s meeting, while raising the bar for future hikes.

“We would need to see a really significant move up in inflation that’s persistent before we would consider raising rates to address inflation concerns,” Powell said.

With trade tensions easing and economic data quelling recession fears, investors are no longer convinced there will be further Fed cuts in the next two years.

For Thomas Simons at Jefferies, trade developments and the potential for reduced tariffs still loom larger for breakevens than the inflation data.

“Inflation expectations are going to be based on something coming out of the trade negotiations, and tariffs are the inflection point,” said Simons, a money-market economist.

Five-year breakevens initially dipped Friday after President Donald Trump said the U.S. hasn’t agreed to roll back all the tariffs on China, before rebounding alongside Treasury yields. Benchmark 10-year rates soared 23 basis points last week to 1.94%, in the biggest leap since September.

Trump could send more shock waves through the bond market in the days ahead. On Tuesday, he’s scheduled to deliver a speech focused on trade and economic policy at the Economic Club of New York.