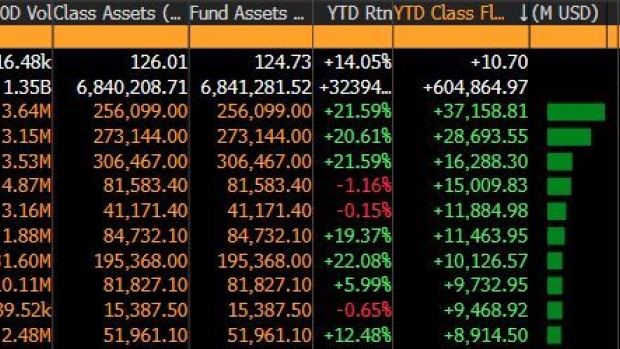 (Bloomberg) -- Six weeks after topping a record for yearly inflows, exchange-traded funds in the U.S. have added another $100 billion.

Investors have now poured $605 billion into the $6.8 trillion industry in 2021, according to data compiled by Bloomberg. The previous record for a full calendar year was $497 billion in 2020, which was overtaken in late July.

Judging by the flows, investors have been generally keen to ride the broad market rebound from the pandemic that saw benchmark American equity gauges notch dozens of all-time-highs this year.

The biggest winner is currently the Vanguard S&P 500 ETF (ticker VOO) -- with $37.2 billion in new cash -- while the second place is the Vanguard Total Stock Market ETF (VTI), with $28.7 billion.

The world’s largest ETF, the SPDR S&P 500 ETF Trust (SPY), is nowhere near top of the leader board with just $8 billion in money added this year. But thanks to that and the rallying S&P 500 index, its assets surpassed $400 billion for the first time in August.