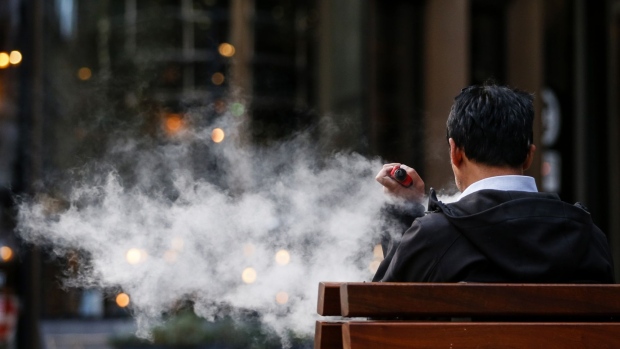 A pedestrian exhales a cloud of vapour from a vape device in London, U.K., on Thursday, Oct. 17, 2019. Vaping has helped tens of thousands of Britons quit smoking each year, a study showed, underlining the U.K.'s more tolerant stance on the alternative to cigarettes as a backlash grows in the U.S. , Bloomberg

(Bloomberg) -- Vaping poses significantly fewer risks than smoking and has a slightly better success rate than other methods of giving up cigarettes, according to a study commissioned by the UK government.

Researchers at King’s College London said that vaping led to a 65% success rate for attempts at quitting smoking, compared with under 59% for other cessation efforts.

The report said that “vaping poses a small fraction of the risks of smoking,” with “significantly lower exposure to harmful substances.”

The researchers measured biological changes associated with the risk of cancer, as well as respiratory and cardiovascular disease. Still, they said more evidence was needed into potential long-term effects of vaping.

The report could lead to prescriptions for vaping as a smoking cessation tool under the National Health Service. In October 2021, the country’s drugs regulator updated a guideline that allows e-cigarette makers to apply for their nicotine-containing products to be licensed as medicines to help people quit smoking.

Scientists who reviewed the study said they endorse plans to prescribe vapes, at a briefing in London on Thursday, given the short-and-medium term favorable health impact and the fact that it has already become a popular alternative to cigarettes.

“Every year smokers continue to smoke takes about three months off their life expectancy,” said Leonie Brose, a researcher at King’s College London and one of the authors of the report. “I don’t know if it’s clear to make people go through various steps before they can try what has been found to be an effective way of stopping smoking.”

The latest report “should give reassurance to health services and policy makers that encouraging smokers who are unable to stop smoking to switch to these reduced harm products will benefit population health,” said Lion Shahab, a professor co-leading the Tobacco and Alcohol Research Group at University College London.

Michael R. Bloomberg, founder and majority owner of Bloomberg News parent Bloomberg LP, has been a longtime champion of tobacco control efforts and has campaigned and given money in support of a US ban on flavored e-cigarettes and tobacco.