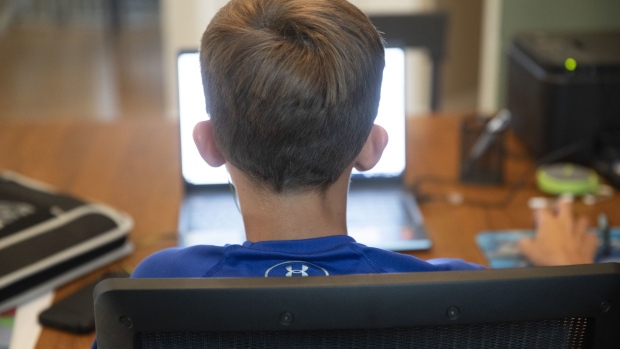 A high school student works on an assignment on a laptop computer at home during a remote learning day in Princeton, Illinois, U.S., on Wednesday, Aug. 19, 2020. Illinois reported 1,337 new coronavirus cases Wednesday as the state's positivity rate dropped below 4% for the first time in weeks. , Bloomberg

(Bloomberg) -- Open English, an online English school targeting Spanish speakers, is planning a U.S. initial public offering next year, according to people with knowledge of the matter.

The company is working with financial advisers to prepare for the stock offering, the people said, asking not to be identified discussing private information.

Open English previously explored a merger with a blank-check company before pivoting to the IPO process, the people added.

The company could become the latest education technology provider to go public after the pandemic boosted the need for tools for remote learning. Companies making products in the space including Duolingo Inc., PowerSchool Holdings Inc. and Udemy Inc. have all gone public this year.

A representative for Open English declined to comment on potential IPO plans.

It’s unclear what valuation it would seek in a listing. Open English’s plans aren’t finalized and could still change.

The company had $77 million in revenue in 2020, and over 1 million students enrolled, the company said in a statement. It has also expanded beyond the U.S. and Latin America into Europe and the Middle East, according to the statement.

Co-founded in 2007 by Andres Moreno in Caracas, Venezuela, the company is headquartered in Miami with offices in Mexico, Colombia, Argentina and Brazil.

“In emerging markets, people see English as a stepping-stone to social mobility, and Open English is the platform helping them actually achieve fluency, and not just learn basic vocabulary like most casual apps,” Moreno, who is also the chief executive officer, said in a statement.

Open English acquired Next University in 2015 and expanded into vocational classes such as web and software development, according to a statement at the time.