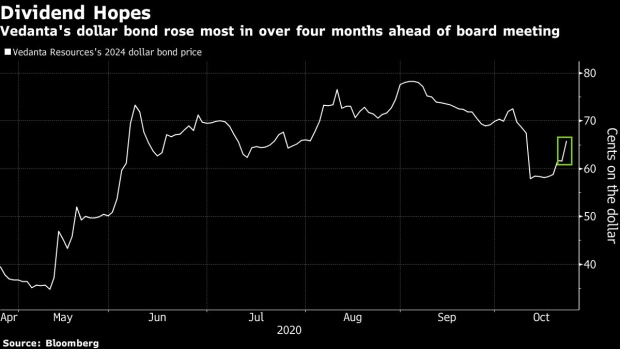 An employees closes a guard to an electrolytic cell in the reduction unit of the Vedanta Ltd. Aluminium Smelter in Jharuguda district, Odisha, India, on Wednesday, June 19, 2019. Vedanta Resources Ltd., owned by Indian billionaire Anil Agarwal, mines and processes copper, zinc and aluminum seams with a focus on India, but has operations in Zambia, Sri Lanka, South Africa and Australia as well. Photographer: Dhiraj Singh/Bloomberg , Bloomberg

The payout will also come as a relief for Vedanta’s minority shareholders, after the company didn’t pass on a previous dividend in May by Hindustan Zinc to them.

The decision comes two weeks after the failure to delist Vedanta. That has curtailed the London-based holding company’s ability to easily access cash from its units and pare down elevated debt. Moody’s Investors Service put Vedanta Resources’s credit rating under review for a downgrade Tuesday, citing an increase in refinancing risk and significant funding needs at the holding company level following the collapse of the privatization bid.

Vedanta Resources, which owns 50% in the Indian base metals producer, has around $2.9 billion in debt maturities due between April 2020 and March 2022, according to Moody’s. This also includes some of the debt taken to privatize Vedanta Resources in 2018 by Volcan Investments Ltd., in which Agarwal and his family are the key shareholders, it said.

While the dividend payments and intercompany loans will be adequate for debt servicing over the next 12 months, “the significant reduction in cash at the subsidiaries in this scenario would make subsequent debt maturities, for example the $1 billion bond due in July 2022, more challenging” S&P Global said on Tuesday.

Vedanta Resources’s dollar bond maturing in 2024 surged 4.2 cents on the dollar Friday to 64.8 cents, the biggest jump since June, on optimism that the dividend payout will ease concerns regarding repayments of upcoming debt maturities.