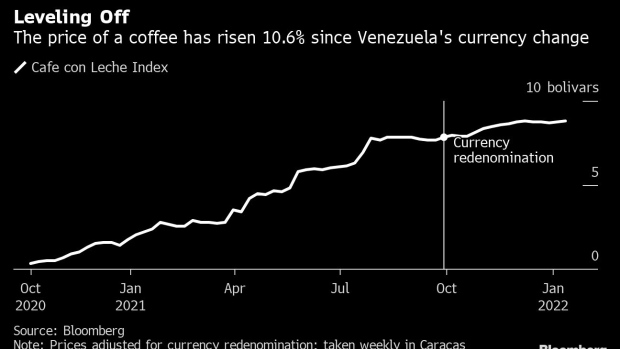 A vendor counts U.S. dollars at a market in Caracas, Venezuela, on Monday, Oct. 4, 2021. Venezuela is launching a new version of the bolivar in the latest attempt to salvage a currency so beaten down by years of hyperinflation that residents have adopted the U.S. dollar. , Bloomberg

(Bloomberg) -- Venezuela broke a four-year bout of hyperinflation, one of the longest in the world, as the socialist government slowed the pace of printing money and the U.S. dollar became the preferred currency in the country.

Prices rose 7.6% in December from November, according to the central bank, marking a full year with monthly inflation below 50%, the threshold most economists commonly use to define hyperinflation. On an annual basis, Venezuela ended 2021 with inflation at 686.4%.

“Venezuela’s hyperinflation went as it came,” Ronald Balza, a professor of economics at Catholic University in Caracas, said Friday. “The government didn’t take any measures, it just stopped doing what was causing it, which is financing itself via accelerated money printing.”

The reduction in money printing comes as a result of less government spending, which effectively cut the fiscal deficit to less than 10% of gross domestic product last year from around 30% of GDP when hyperinflation began in late 2017, according to Luis Oliveros, a professor of economics at Central University in Caracas.

In place of the bolivar, which is the national currency, the country has unofficially adopted the U.S. dollar. More than 60% of all transactions take place in the currency.

“Although inflation in bolivars is still important, it doesn’t capture all the information about what is going on with prices,” Oliveros said. “We need to pay attention to prices in dollars.”

Despite the exit from hyperinflation, the country still suffers from one of the highest inflation rates in the world.

While official government data in Venezuela is notoriously unreliable, a parallel inflation index gathered by opposition lawmakers also showed a significant easing in prices last year. Bloomberg’s Cafe Con Leche Index -- which tracks the price of a cup of coffee in Caracas on a weekly basis -- shows increases have leveled off too, especially since the government redenominated its currency, dropping six zeros from the previous bolivar.

The central bank has upped its interventions in the foreign exchange market, keeping the digital bolivar -- as the new currency is known -- relatively stable. Since October, it has been more than doubling their supply of dollars to the market, injecting as much as $100 million per week and keeping the exchange rate artificially below 5 bolivars per dollar.

Some wonder if the government will have the cash to continue the policy. Central bank reserves have fallen below $6 billion, the lowest in at least 30 years, excluding IMF funds that the government can’t access. Analysts have said the government likely uses oil revenue and other hard currency income sources to intervene in the foreign exchange market.

“Sooner or later we are going to see an important adjustment in the exchange rate, and that is going to have an impact on prices,” Jose Manuel Puente, professor of the Public Policy Center at the IESA, said.