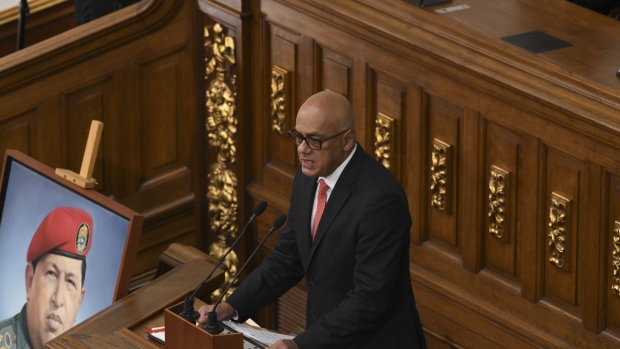 (Bloomberg) -- Officials from the Venezuelan government and opposition are expected to meet next week in Mexico City to kick off negotiations aimed at ending a political standoff ahead of regional elections in November, according to people with direct knowledge of the matter.

National Assembly leader Jorge Rodriguez and Miranda state Governor Hector Rodriguez will negotiate on behalf of President Nicolas Maduro while the opposition will send former legislator and mayor of Baruta Gerardo Blyde along with a representative from each of the main parties, said the people who asked not to be named discussing the issue since it hasn’t been made public. The politicians are expected to meet as early as Aug. 13 to sign a memorandum of understanding to set a framework for more detailed talks in September that would lead to agreements on conditions and terms of holding the vote later this year.

Norway, which mediated negotiations in 2019, would oversee the talks along with delegations from Russia and France, which will help negotiate for Maduro and the opposition led by Juan Guaido, respectively, three of the people said. Argentina and the Netherlands have also been invited, they said.

The objective is to create a series of conditions for all political forces to take part in nationwide gubernatorial and mayoral elections on Nov. 21 to bring an end to a five-year stalemate in which the main opposition parties have boycotted previous votes. The opposition’s participation is considered a key test for Maduro as he tries to convince the U.S. to ease economic sanctions by lifting bans on politicians and parties.

Rodriguez and Blyde declined to comment on the prospects for traveling to Mexico next week or details of the talks. Mexico was selected because it is seen as a neutral venue to host the conversations. A Mexican Foreign Ministry spokesman said he had no information about whether negotiations were being planned.

Three previous attempts at reaching an electoral agreement have broken down, most recently in Norway and Barbados in 2019. But Maduro has said that the government is open to fresh talks. He said last month that the government is ready to “sit down with a realistic, objective and a truly Venezuelan agenda to reach partial agreements for peace, so that all criminal sanctions are lifted.”

It is unclear whether the former vice president of the National Assembly Stalin Gonzalez, a close ally of former presidential candidate Henrique Capriles, will attend the dialogue. The Capriles-led bloc insists that before starting the negotiation, the opposition must decide whether to register candidates. The registration period runs from August 9 to August 29.

Geoff Ramsey, a Venezuela analyst at the Washington Office on Latin America, said this negotiation could differ from previous rounds because there is an understanding, in Washington and in Caracas, that there won’t be an overnight solution, but a long-term transition.

“The idea of maximum pressure leading to a breakthrough on it’s own without negotiation has been thoroughly discredited,” he said. “That is very positive, and shows the possibility of building partial and gradual agreements.”

Read more: Venezuela’s Opposition Is Open to New Round of Political Talks

Guaido, who leads the opposition’s parallel National Assembly, has said that the negotiations should focus on an electoral schedule that includes future presidential and legislative votes and not just for mayors and governors this year.