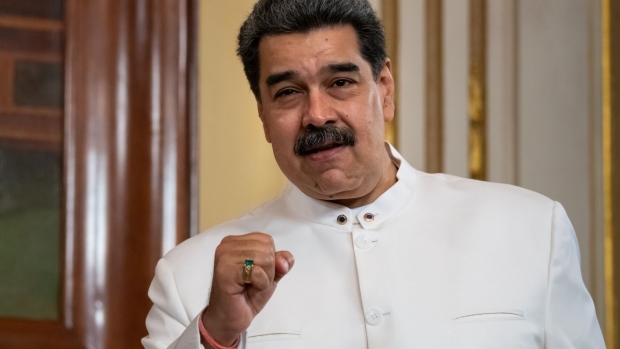 (Bloomberg) -- Venezuela’s battling political factions restarted negotiations on Saturday in Mexico, signing a rare deal to work together on a humanitarian spending plan and setting the stage for the US to ease restrictions on Chevron Corp. to operate in the country.

Representatives of the Venezuelan government and the opposition signed a humanitarian agreement that seeks to get access to some of the country’s frozen funds abroad and using them to reinforce the public health system and the electrical grid, among other purposes.

The parties also agreed to request support from the United Nations with the implementation of the program in the country, which includes the “establishment of a single trust fund for the protection of the Venezuelan people,” according to the agreement. Compliance will be monitored by various representatives to the agreement.

In addition, Chevron received a six-month license that authorizes the company to produce petroleum or petroleum products in Venezuela and resume crude exports, according to a general license from the US Treasury Department. It doesn’t allow Chevron to expand its operations in the country, or permit oil related imports from Iran and Russia.

The San Ramon, California-based driller’s crude exports had been halted since 2019, when the US ratcheted up sanctions against the OPEC producer. In 2020, before the US ordered a complete halt of drilling operations, Chevron’s share of Venezuelan crude oil production was 15,000 barrels a day.

US Eases Sanctions on Venezuela With Chevron Resuming Oil Output

Delegations representing President Nicolas Maduro and opposition political parties opened the meetings in Mexico City after signing an agreement to repair electricity grids and pay for health care projects using $2.7 billion of funds currently frozen in international accounts due to US sanctions.

“We’ll keep trying to get an approach because we believe the negotiation is the tool to allow Venezuelan people to sign such agreements,” said Gerardo Blyde, head of the opposition’s delegation. “They don’t solve the problem on its root though.”

If talks continue in subsequent rounds of negotiations, the opposition plans to press the government to set conditions for Venezuela’s 2024 presidential elections.

The deal for humanitarian projects, which would be overseen by the United Nations, is an important step for the two sides to work together on larger political issues, said Luis Vicente Leon, director of Caracas-based consultancy Datanalisis.

“The parties are going to Mexico to finalize what they’ve already agreed upon,” Leon said, referring to the plan. “It’s probably the only way for the opposition to move toward some agreements that help reinsert it in the political scenario.”

Maduro is in urgent need of cash to keep the nation’s recovery on track, as the economy stabilizes following one of the deepest slumps in world history, which caused more than 7 million people to flee the country. He sent his top deputy, National Assembly President Jorge Rodriguez, to the Mexican capital while the opposition coalition is led by Blyde. Members of the opposition said they expect to meet every 15 days.

The parties haven’t agree on a date for their next meeting in Mexico, Rodriguez said.

Previous rounds of talks between the government and the opposition have collapsed, most recently in October 2021, when Maduro walked away from the table after his ally and Colombian financier, Alex Saab, was extradited to the US to face money laundering charges. In this round of talks, Saab’s wife, Camilla Fabri, is acting as Maduro’s representative.

--With assistance from Andreina Itriago Acosta and Alex Vasquez.

(Updates with additional information on Chevron license in fourth paragraph.)