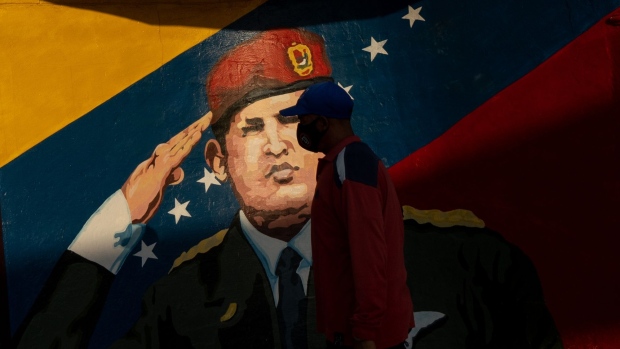 A resident passes a mural dedicated to the late Hugo Chavez in Sabaneta, Barinas state, Venezuela, on Friday, Jan. 7, 2022. Venezuela's government risks humiliation this weekend if voters infuriated by fuel shortages throw out the ruling party in the birthplace of Hugo Chavez, a region that has been governed by his family for more than two decades. Photographer: Manaure Quintero/Bloomberg , Bloomberg

(Bloomberg) -- Venezuela’s government is making a fresh attempt to open channels with international investors, presenting potential deals in the oil and tourism sectors and talking up new economic growth data.

Advisers, led by top economic aide Patricio Rivera, held an hour-long call on Wednesday with at least two dozen bondholders and fund managers from the U.S. and Europe, according to four people with direct knowledge of the conversation. The call was organized by the Venezuela Spain Chamber of Industry and Commerce.

Rivera, a former Ecuadorian Finance minister who is spearheading reforms aimed at liberalizing Venezuela’s economy, briefed the investors on policy shifts and the government’s commitment to become more market friendly, the people said. He also said the government was open for investments in several sectors, from oil and minerals to tourism, the people said.

Rivera did not respond to a request for comment.

Venezuela has had limited contact with debt holders since it defaulted on bonds in 2017. It owes at least $60 billion plus interest on those defaulted notes. The call comes as the country breaks a seven-year recession, posting economic growth of  7.6% in the third quarter of 2021, according to preliminary data, and as it exits a four-year bout of hyperinflation.

Despite the new outreach, Venezuela remains under U.S. economic sanctions that pose an important roadblock to American bondholders.