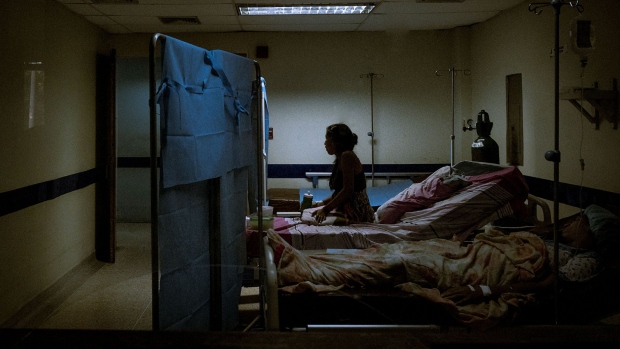 (Bloomberg) -- A recent influx of first aid supplies has only slightly improved conditions inside emergency rooms and surgical units of Venezuela’s main hospitals, which are still suffering acute shortages of essential medicines and medical supplies, according to the most recent National Hospital Survey released by Dr. Julio Castro, tropical medicine professor at Venezuela’s Central University.

“No amount of humanitarian aid can substitute a decent health system,” Castro said while presenting the results to international media.

For July, emergency rooms in the survey were found to be going without 43.3% of necessary supplies while the comparable figure for surgical units stood at 34.1%, according to Castro. The monthly survey, which was launched last year and canvases 40 major hospitals in 23 states nationwide, tallies up shortages of 20 basic emergency rooms supplies and 11 essential items in operating theaters.

Overall availability of supplies has improved only incrementally since November 2018 as Venezuela is wracked by blackouts and power interruptions. Marginal improvement in the situation coincides with distribution of emergency kits by the International Federation of Red Cross and Red Crescent Societies, and from various UN agencies, as part of humanitarian aid efforts.

Blackouts and water shortages are a “chronic” issue, according to the study. In July, 70.87% of the hospitals had “intermittent” water service and only 26.21% had water daily. In the same month, hospitals in the survey averaged 6.8 hours without electric power per week.

To contact the reporter on this story: Alex Vasquez in Caracas Office at avasquez45@bloomberg.net

To contact the editors responsible for this story: Patricia Laya at playa2@bloomberg.net, Robert Jameson