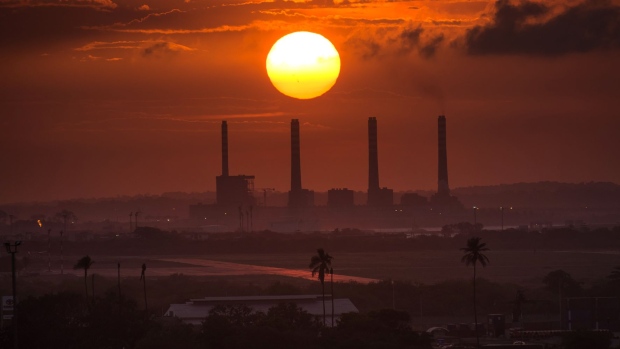 (Bloomberg) -- In Venezuela, waiting in line at a gas station -- sometimes for days -- has become so routine that it’s hard to imagine life without it.

But go see Tareck El Aissami, the oil minister, and you’ll find out something magical is about to happen. In weeks, he said in a rare interview, the gas lines will disappear. By year-end, crude output will quadruple from a historic low. And in the foreseeable future, foreign investment will flood in and Venezuela, proud founder of OPEC, will again rank among the world’s four largest producers.

Over breakfast and more than three hours of conversation at his downtown Caracas office, El Aissami sketched out a vision so optimistic that it strains credulity.

Venezuela is, after all, subject to some of the toughest economic sanctions ever imposed. It has no access to capital or commodity markets and is effectively shut out of global supply chains. The U.S. doesn’t recognize Venezuela’s leader, Nicolas Maduro, as president.

Against that backdrop, El Aissami, one of Maduro’s chief lieutenants, is plotting a miraculous comeback. And in his telling, it’s well underway, backed by a new hydrocarbon law in the works and beyond reach of U.S. meddling.

“They blocked us, they sanctioned us, they stole all our foreign assets,” said El Aissami, dressed in a summery blue suit and pink shirt, a box of Cuban Cohiba Siglo I cigars by his desk. “Without any financing, with our own money, we’ve been able to invest enough to stop the slide and start a gradual recovery.”

El Aissami, personally sanctioned by U.S. Treasury over allegations of drug trafficking, is confident all will be forgotten because there’s so much money to be made rebuilding Venezuela’s oil industry. He expects U.S. producers to rush back in. There are ready customers for the country’s heavy Orinoco Belt crude in Texas and Louisiana refineries, he says.

If ever U.S. sanctions were lifted and Venezuela allowed to sell oil again, it would be a bonanza. Just 1 million barrels a day are worth some $20 billion a year at current prices.

In the 1990s, Venezuela was a true oil power, pumping at its peak close to 3.5 million barrels a day, second only to Saudi Arabia in the Organization of Petroleum Exporting Countries, or OPEC.

Although output had already slipped by the time Maduro succeeded Hugo Chavez as president in 2013, it began plummeting once the U.S. imposed sanctions on state-owned Petroleos de Venezuela SA, or PDVSA, in 2017. Production bottomed at about 310,000 barrels in August 2020, wiping out almost all of the country’s export revenues.

Now, El Aissami said, it’s back over 700,000 barrels, including some stockpiled oil, and will rise to 1.5 million by year-end. Maduro repeated the target in a separate interview with Bloomberg Television.

Asked about that goal, Francisco Monaldi, an expert on Venezuela’s oil industry at Rice University, called it “impossible.”

“Production can go up to 600,000 barrels per day if everything goes well and sanctions are not increased,” he said. “Even getting to that would be implausible in the medium term; production capacity has been falling since 2014 and there have been no oil rigs operating in Venezuela for a year.”

It’s a similar story with the country’s four refineries. Only 18 months ago, they sat idle following years of underinvestment and neglect. Venezuela had to import all of its gasoline, diesel, jet fuel and propane, mostly from Russia and Iran.

Some of those decisions date to the Chavez era, when Rafael Ramirez ran PDVSA. El Assaimi was unusually candid in his assessment.

“Huge mistake, bad management, bad practice, lack of vision,” he said. “Those were wrong decisions and we paid dearly for them.”

Today, El Aissami claims, the refineries are on target to produce 100% of domestic fuel demand by the end of June, processing about 500,000 barrels of crude a day and soon thereafter the gas station lines will “disappear.”

According to El Aissami, 46, the government will spend $1.2 billion this year reviving the domestic oil industry. But that’s nowhere near enough. Venezuela needs capital for just about everything -- drilling, marginal-well recovery, surface-treatment processes and maintenance -- and Maduro said he has no plans to privatize assets.

How high production could get, and how much it would cost, is a matter of debate. El Aissami said 6 million barrels a day -- almost double Venezuela’s peak production in mid 2000s -- is possible.

During last week’s interview, Maduro said output might get back to 5 million a day with about $30 billion of investment. Monaldi, director of the Latin American Energy Program at Rice in Houston, estimates it would take multiples of that amount.

ConocoPhillips won $10 billion of claims in arbitration, but Venezuela never paid and the company has been trying to gain control over PDVSA assets outside the country. Exxon Mobil Corp. is also fighting for compensation.

Chevron Corp. is among the few that remained in Venezuela and has had to apply repeatedly for sanctions waivers from the U.S. Treasury just to maintain property and pay suppliers.

In the meantime, it’s a struggle. The foreign experts who used to run so much of Venezuela’s oil industry are long gone and the sanctions have forced PDVSA to become more self-sufficient.

El Aissami described how the company, once a favored customer of countless multinationals, built a network of more than 500 domestic vendors with 100,000 employees. It’s now machining its own replacement parts out of homegrown metal alloys.

“We’ve learned how to make something out of nothing,“ he said. “It used to be that whenever any piece of equipment at PDVSA was damaged, you could pick up the telephone and call Siemens, General Electric, any company, and they’d deliver a new one in 24 hours. Now it’s just us, with our technology and our engineers.“