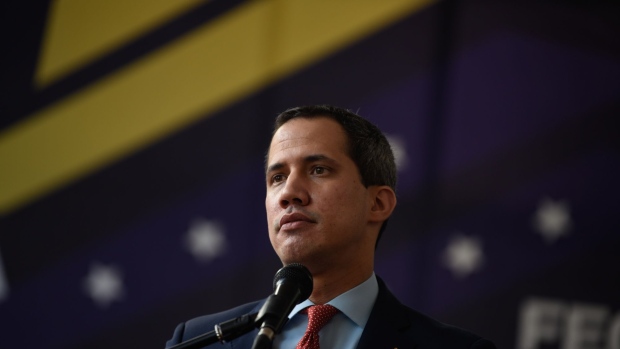 Juan Guaido, president of the National Assembly who swore himself as the leader of Venezuela, speaks during a news conference in Caracas, Venezuela, on Monday, Nov. 22, 2021. Venezuela's ruling socialist party won all but three races for governor in regional elections Sunday marked by low turnout amid splits within the U.S.-backed opposition and voter apathy following seven years of economic recession. , Bloomberg

(Bloomberg) -- Venezuela’s opposition has suggested the U.S. ease economic sanctions on the country and some of its individuals, a potential policy shift aimed at bringing President Nicolas Maduro back to the negotiating table, according to National Assembly head Juan Guaido.

The plan could be put in motion even before talks hopefully resume in Mexico, Guaido said, as the opposition pushes for “free and fair” elections as soon as possible as well as changes to Venezuela’s judicial system.

“It’s on the table, aimed at strengthening the opposition in its role as interlocutor and the possibility of an agreement,” he told Bloomberg News in an interview from Caracas. “The dictatorship needs to give an answer.”

An official for the State Department said the U.S. does not preview actions on sanctions. “The United States, along with our partners and allies, seeks to use multilateral pressure to move Venezuela toward a democratic solution,” the official said in a written reply to questions. “The Maduro regime can create a path to easing sanctions by engaging in sincere discussions with the opposition to create the necessary conditions to enable free and fair elections to take place in Venezuela.”

U.S. Ambassador to Venezuela James Story said on a Jan. 6 webcast that they are “willing to lift, ease and change sanctions when there are negotiations that bring about changes to restore institutions and democracy in Venezuela.” He did not mention easing sanctions before negotiations take place. Story’s office did not immediately respond to a message seeking comment.

Messages to Venezuelan government leaders about the resumption of talks went unanswered.

Talks between the government and the opposition broke down last year when Colombian businessman Alex Saab, a top ally of Maduro, was extradited to the U.S. from Cape Verde to face money laundering charges. Earlier this month, the Venezuelan president signaled he could return to the negotiating table if “positive actions” to restore dialogue in Mexico were taken.

“We expect to start negotiations as soon as possible,” Guaido said, cautioning that failure to reach an agreement would lead to another tightening of sanctions more targeted at individuals involved in corruption and crimes against humanity.

Venezuela’s economy and currency have suffered a historic collapse since Maduro took office in 2013. But the 59-year-old president has seen his government reinforced as of late, with his party winning regional elections in November, hyperinflation ending, and the economy growing in 2021 for the first time in seven years.

A national signature drive seeking to force a referendum to recall Maduro failed this week due to the way it was organized by the government, Guaido said. The process was announced only five days in advance, with about 1,200 sites where citizens could sign.

Fewer than 1.5% of voters signed on to the measure, well short of the 20% needed in all 23 states plus the capital, electoral authorities said Thursday. Venezuelans won’t have another chance to remove Maduro through the ballot box until elections scheduled for 2024.

“Without that option, the challenge we have now is how to mobilize, how to organize, how to find spaces for safe participation so that people can express themselves,” Guaido said.