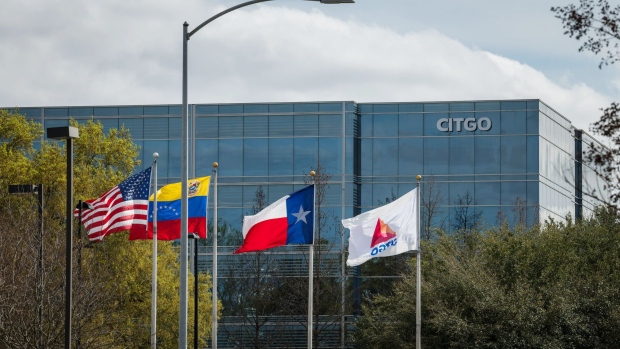 Flags fly outside Citgo Petroleum Corp. headquarters stands in Houston, Texas, U.S., on Thursday, Feb. 14, 2019. Interviews with current and former employees at headquarters and refineries reveal a company at a turning point. Citgo is free for the moment from political interference, cronyism and corruption, but lacks leaders to chart a path forward. Photographer: Loren Elliot/Bloomberg , Bloomberg

(Bloomberg) -- Venezuela opposition leaders are preparing for potential talks with three large creditors whose legal claims may jeopardize their control of Citgo Petroleum Corp., the main foreign energy asset under control of the challengers to the country’s socialist regime.

Citgo’s parent company, PDV Holding Inc., contracted JPMorgan Chase & Co. in April to act as an adviser and has since been engaged in an “exploratory process” for potential talks with creditors, according to a statement from the PDVSA ad hoc board, which oversees the companies. The board is controlled by the Juan Guaido-led opposition, which is seeking to oust Nicolas Maduro as Venezuela’s president.

Creditors including mining company Crystallex International Corp., oil company ConocoPhillips and holders of a PDVSA bond that matured in 2020 partially secured by Citgo shares are pushing for a sale of PDV Holdings to recover some of the billions that they are owed.

“We are trying to explore if some creditors would be willing to talk about possible alternative options to resolve the disputes,” said Horacio Medina, president of the PDVSA ad hoc board. There are no formal proposals yet, he said. If creditors are willing to talk, the board will need approval from the opposition-led National Assembly before starting negotiations.

PDVSA doesn’t have much time to persuade creditors to negotiate. A judgment ordering the sale of Citgo’s parent company’s shares has already been approved by a Delaware court to satisfy the claims from the creditors.

For now, the U.S. government is prohibiting any sale from going forward, as part of its strategy to support Venezuela’s opposition.

Despite JPMorgan’s involvement, this latest attempt on negotiations has been met with some skepticism from some creditors, more than two years after the Guaido opposition took control of the companies. Francesco Marani, head of trading at Madrid-based Auriga Global Investors said creditors are waiting to see how nationwide mayoral and gubernatorial elections play out.

“Guaido efforts to engage bondholders ahead of November elections is likely short lived,” he said. The brokerage trades the 2020 PDVSA bonds, which are currently exchanging hands at around 27 cents. “Everyone wants to see what happens after the election.”