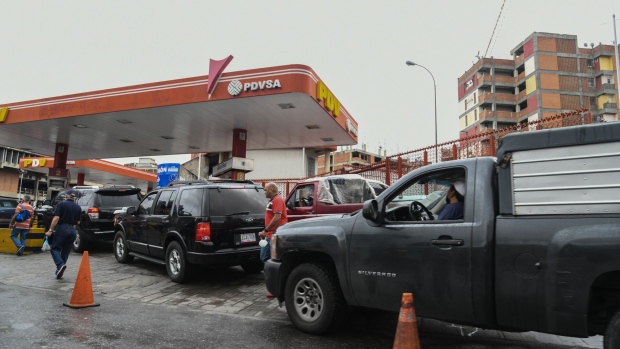 Customers wait in line to refuel vehicles at a Petroleos de Venezuela SA (PDVSA) gas station in Caracas, Venezuela, on Monday, Oct. 4, 2021. Venezuela is launching a new version of the bolivar in the latest attempt to salvage a currency so beaten down by years of hyperinflation that residents have adopted the U.S. dollar. Photographer: Carolina Cabral/Bloomberg , Bloomberg

(Bloomberg) -- Venezuela’s government will impose a 20-fold increase in subsidized gasoline prices starting Sunday, according to a statement from state oil company PDVSA.The rise in subsidized fuel prices “is a necessity” due to the “re-denomination” of the local currency, PDVSA said. The hike comes weeks after Venezuela launched a new currency, the digital bolivar, which slashed six zeros off the former currency on Oct. 1.

It’s also the second increase in subsidized fuel prices since June 2020, when President Nicolas Maduro’s government rolled back a decades-long policy on fuel price freezes in order “to guarantee fuel production and distribution in the country,” according to the statement.Even with the jump in prices, PDVSA’s subsidized fuel is still among the cheapest in the world. The increase would bring fuel prices to 2.3 cents per liter or 10 cents per gallon, a fraction of what it costs at gas pumps in most countries. It’s currently at 0.1 cent per liter or 0.5 cents per gallon.Venezuela has a dual-pricing system, with one subsidized amount and a separate “international” price of 50 cents per liter or $2.27 per gallon.