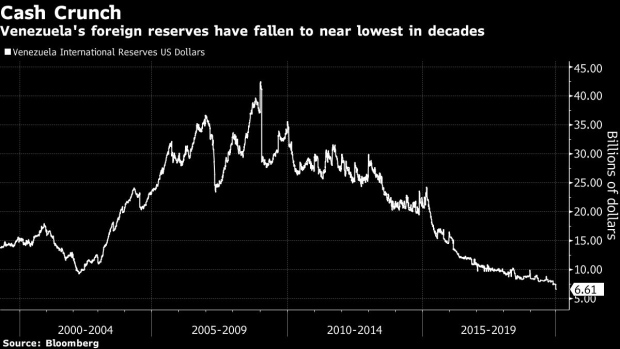 (Bloomberg) -- Venezuela’s international reserves, already at a 30-year low, have hit a grim new milestone as the amount of liquid assets falls below $1 billion amid crippling economic sanctions.

Venezuela’s central bank now has only about $800 million left in cash and an additional $200 million of other liquid assets, according to three people with knowledge of the bank’s balance sheet. While the country holds some 73 tons of gold in local vaults, selling it has become increasingly difficult amid the U.S. efforts to cut off Nicolas Maduro’s regime from a global network of buyers, banks and middlemen.

The shrinking coffers mark a new low for Venezuela, where an economic crisis rooted in the collapse of its all-important oil industry has been exacerbated by wide-reaching U.S. sanctions that have cut the nation off from international capital markets. A shortage of cash could threaten the Maduro regime’s ability to continue food subsidy programs, import basic goods and maintain support from top military officials.

A significant chunk of Venezuela’s gold, 32 tons worth about $1.6 billion, remains in London after the Bank of England declined multiple requests from Maduro to repatriate the gold. While the central bank is independent, the U.K. government doesn’t recognize Maduro as the country’s legitimate leader and says his regime shouldn’t have access to overseas assets.

Total reserves fell by $832 million this month to $6.11 billion, the lowest since July 1989. The drop is largely due to cuts in cash holdings of Chinese yuan, one of the people said.

The reserves also include about $400 million of special drawing rights that are hung up at the International Monetary Fund, which has also shut Venezuela out. The country had already whittled down its SDR holdings from almost $1 billion in March 2018.

Opposition leader Juan Guaido has been recognized by more than 50 nations as Venezuela’s rightful president since early 2019, and the sanctions that have cut Maduro off from the global financial system are part of efforts to oust his administration.

--With assistance from Ben Bartenstein.

To contact the editors responsible for this story: Daniel Cancel at dcancel@bloomberg.net, Brendan Walsh, Rita Nazareth