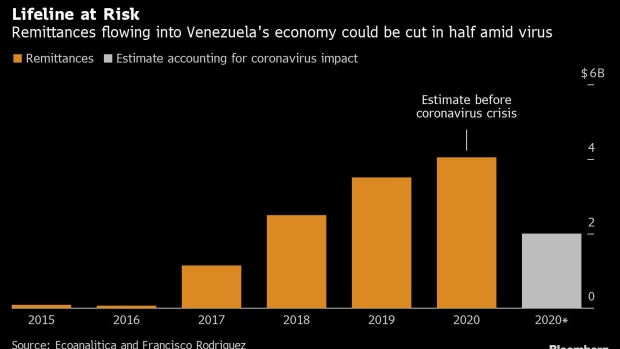 (Bloomberg) -- Business closures and lockdowns in the U.S., Europe and Latin America are putting at risk billions of dollars in remittances on which Venezuela’s economy depends.

Venezuelan families get nearly $4 billion per year from relatives abroad, but that figure is projected to slump as migrants lose their jobs amid the coronavirus pandemic. That would bring additional misery to a country that has also been hit by a crash in crude prices as well as its own outbreak of the virus.

Mariang Stefanie Escala, 29, earned 34,000 pesos ($8) a day as a waitress in a Bogota restaurant until March 19, when the managers told her they were closing due to a lockdown announced by the mayor’s office.

Escala sent 300,000 pesos per month to her family in the Venezuelan city of Puerto la Cruz, but now doesn’t even have enough to pay her own rent or electricity bill.

“There are a lot of Venezuelans in the same situation,” she said, in a phone interview.

Venezuela is undergoing the deepest depression in the history of the Americas, made even worse by U.S. sanctions. The inflow of dollars from the 5 million Venezuelans who left the country in recent years is a lifeline for about a third of the households left behind.

Now Venezuelan migrants in countries such as Colombia, Peru and Spain risk being thrown out of work amid the global downturn.

“The economies of the countries where Venezuelans are living and sending remittances from are losing dynamism and, adding the exceptional situation of the coronavirus, impediments to sending money build up,” said Francisco Rodriguez, a Venezuelan economist who teaches at Tulane University.

Rodriguez estimates remittances will drop 60% this year. Other economists, such Ecoanalitica director Asdrubal Oliveros, estimate a less dramatic drop of 30%, depending on how severely the global crisis affects employment.

A quarter of Venezuelans -- about 7 million -- face regular food shortages, according to the United Nations Food Program.

President Nicolas Maduro ordered a nationwide lockdown on March 17 to curb the spread of the virus, which has so far infected at least 91 people in Venezuela and more than 450,000 worldwide.