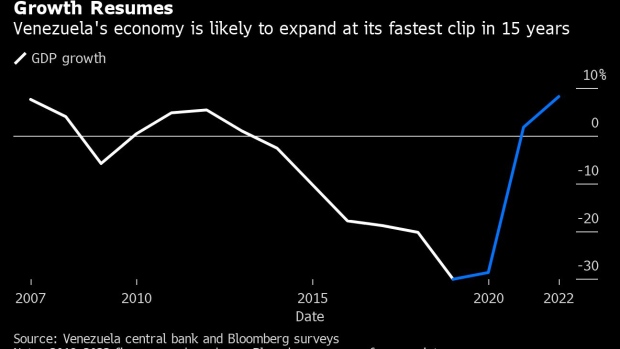 (Bloomberg) -- Venezuela’s economy is forecast to expand at its fastest pace in 15 years, marking a rebound for a country that recently emerged from the deepest recession in Latin America.

Gross domestic product is expected to grow 8.3% this year, from 1.9% in 2021, according to a Bloomberg survey of five economists. The country is getting a lift from a rise in oil production and seeing tax revenue and banking credit expand, which suggests domestic demand is rising.

Economists had forecast growth of 5.2% as of December. The central bank hasn’t published official GDP data since 2019.

To be sure, the economy is a sliver of what it once was. A seven-year recession that ended in 2021 and was marked by bouts of hyperinflation and a migration crisis has left the country hollowed out. Over the past decade, gross domestic product shrunk to around $49 billion from $352 billion in 2012, according to the International Monetary Fund.

“The headline could be: the country that has always done poorly is now growing. But when we look at recent history, we see that it’s nothing compared to the levels of recession we’ve had,” said Angel Alvarado, senior fellow at the University of Pennsylvania and founder of the Venezuelan Finance Observatory during a presentation in which he released a forecast of 11.5% growth this year.

Alvarado said the country would need to post double-digit growth for a decade for it to return to the size it was in 2012.

For now, it is benefiting as crude prices have soared nearly 50% this year to around $115 a barrel. With more foreign earnings from its largest export pouring in, imports and consumption are on the rise.

Meanwhile, the country’s beleaguered energy sector has managed to more than double production over the last two years to around 700,000 barrels a day. The country has the world’s largest proved crude reserves and once pumped 3 million barrels a day.

Production, however, is leveling off and the sector is desperate for more foreign investment, which is currently hampered by economic sanctions that prevent US companies from doing business with Venezuela’s state oil company.

If the US eases sanctions, new investment could spur an additional boost to production of as much as 300,000 barrels a day, Guillermo Guerrero, strategist at Emfi Group Ltd., wrote in note to clients.

While the Biden administration has kept in place most sanctions against the country, it has signaled it is willing to ease restrictions if President Nicolas Maduro makes progress toward resolving a protracted political standoff with the opposition.

“Any relaxation of oil industry sanctions would give an important boost to growth,” Guerrero said.