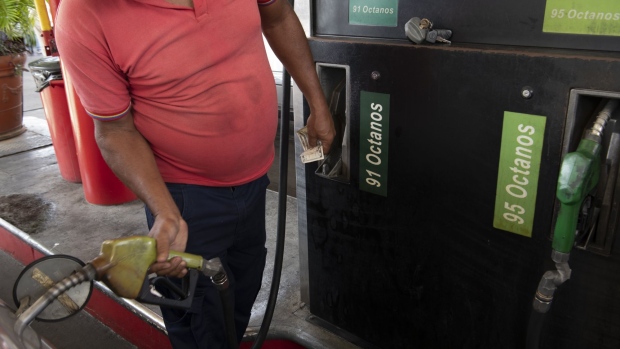 A worker wearing a protective mask refuels a vehicle at a Petroleos de Venezuela SA (PDVSA) gas station in Caracas, Venezuela, on Saturday, April 25, 2020. In a week when oil futures fell below zero, everyday Venezuelans are paying more than ever for gasoline, about $10 per gallon, as extreme shortages fuel a booming black market. Photographer: Carlos Becerra/Bloomberg , Bloomberg

(Bloomberg) -- Venezuela’s long gas station lines are coming back after a short reprieve from shipments of Iranian fuel in May as the country struggles to repair its ailing refineries.

Lines at the pump had disappeared following the arrival of five Iranian tankers in May, carrying a total of 1.5 million barrels of fuel. Relief is unlikely to return without more fuel imports from abroad.

Domestic gasoline production was also rising with the help of technicians from Iran who spent two months in the country inspecting and repairing refineries, according to people familiar with the matter who asked not to be identified because the information isn’t public. The engineers left the country last week, one of the people said.

Progress in restoring fuel production was further set back after the Cardon plant halted production due to mechanical issues and a fire.

Even gas stations at Falcon state, home to the Paraguana refining complex, one of the largest in the region, have had to shut. “Some gas stations are once again receiving less fuel shipments and other have had to close for several days a week,” said Ana Maria Urdaneta who heads the gas stations in the Caracas area.

The U.S. continues to enforce sanctions on the country, reducing the likelihood of imports from abroad. Last week, the U.S. sought legal permission to seize all petroleum cargoes aboard four Iranian vessels headed to Venezuela. Iran and Venezuela have insisted in their right to trade, defying U.S. willingness to force regime change in Caracas via sanctions.

Venezuela is currently producing only 80,000 barrels a day of gasoline, one of the people said. Refineries are very unstable and output fluctuates daily.