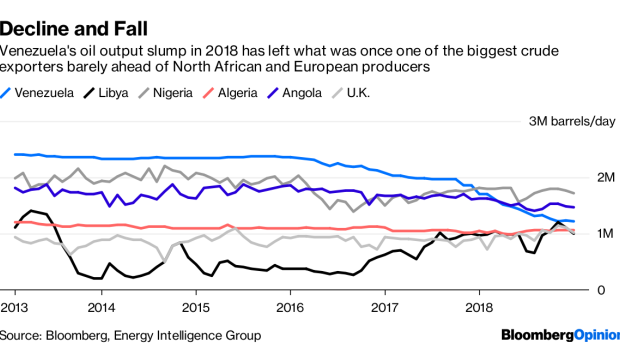 Once upon a time, the shock waves from a political crisis in Venezuela could reverberate around the world.

In 1954, it accounted for more than half of profits at Standard Oil Co. of New Jersey, the company that would eventually become Exxon Mobil Corp. When former President Hugo Chavez briefly disappeared amid an abortive 2002 coup, West Texas Intermediate oil fell 10 percent in two days on the prospect that a different government might end up pumping more crude.

That makes the latest turn in the country’s decline a double blow. Economic collapse is spiraling into political turmoil, with President Donald Trump recognizing opposition leader Juan Guaido as head of state amid street protests Wednesday and President Nicolas Maduro in turn breaking off relations with the U.S., Venezuela’s biggest trading partner. Yet the oil market doesn’t care.

In one way, that’s hardly surprising. A country that was the world’s biggest oil exporter until Saudi Arabia started to overtake it in the mid-20th century has declined to the point where it’s almost a footnote.

The collapse of production last year as state-owned Petroleos de Venezuela SA crumbled has left Venezuela behind the likes of Nigeria and Angola, and barely ahead of Libya, Algeria and the U.K.

The Permian basin in west Texas, the heart of the U.S. shale oil boom, now produces more than three times as much crude as the South American country, which still on paper has the world’s biggest crude reserves.

At the same time, those tempted to ignore Venezuela should take care. The country still accounts for about 7 per cent of U.S. crude imports, and its importance to U.S. refiners is, if anything, still greater. All that sweet, light oil coming out of the Permian is great for making gasoline, but the world already has a glut of that.

Processors along America’s Gulf coast instead need more heavy crudes to produce diesel and other middle distillates, which are particularly in demand thanks to changing regulations on shipping emissions. The decline of Venezuelan production and the difficulty of getting product out of Canada’s prairies means they’re running out of options. Maya crude, a Mexican variety that’s the best heavy crude option for American refiners to mix with light domestic product, rose to its biggest premium over WTI in five years in November.

The days when events in Venezuela could sway the world’s oil market seem far in the past. Still, a crippled giant can still lash out. It’d be best not to be too relaxed about events in Caracas.