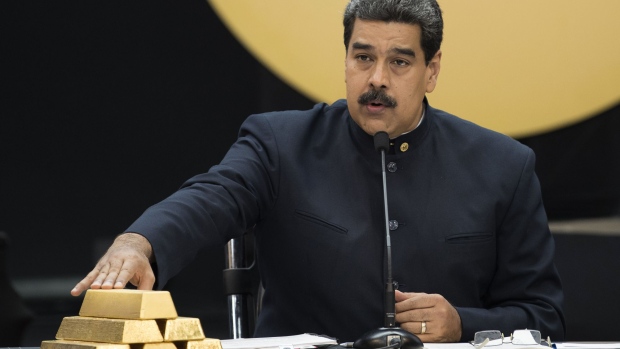 (Bloomberg) -- Venezuela’s government is planning to move to a fully digital economy as hyperinflation has made worthless bolivar notes practically disappear, and dollarization expands through the local financial system.

The U.S. dollar has operated as an escape valve for Venezuela amid U.S. sanctions and collapsing oil revenues, President Nicolas Maduro said in a televised interview with Telesur on Friday. He said 18.6% of all commercial transactions are in dollars, while 77.3% are carried out in bolivars with debit cards. Only 3.4% are paid with bolivar notes.

“They have a war against our physical currency. We are moving this year to a more profound digital economy, in expansion. I’ve set the goal of an economy that’s 100% digital,” Maduro said, adding that physical money will eventually disappear.

Venezuela’s currency has lost 99% of its value during three years of hyperinflation, forcing the country to issue higher-denomination notes that in turn become useless in record time. The largest note now in circulation, 50,000 bolivars, is worth about $0.04. The government has delayed plans to issue a 100,000 bolivar bill, which currently would be worth less than $0.10.

After formerly subsidized fuel prices were increased in June, cash is now only used to ride public transportation, and the Caracas subway routinely stops charging passengers due to cash shortages.

Since late 2019, local banks have slowly started to offer accounts and financial products in U.S. dollars, but those remain limited as there’s no clearing system in place to allow for digital transactions in U.S. dollars.

Some banks have had technical meetings with Venezuela’s central bank in an attempt to solve the problem amid high skepticism and caution due to U.S. sanctions. But Maduro vowed to create “payment formats” allowing transactions using savings and checking accounts in U.S. dollars.

A press official with the Central Bank of Venezuela didn’t immediately respond to a request for comment.

Despite promising to expand the use of the U.S. dollar in the economy, Maduro said a formal dollarization wouldn’t happen. “Venezuela has its currency and we are going to defend it,” he said.