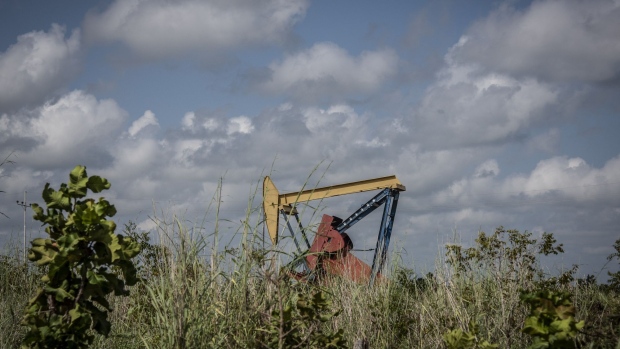 (Bloomberg) -- A Chinese oil contractor halted work on an expansion project in Venezuela because it hasn’t been paid, underscoring the difficulties for the Nicolas Maduro regime even at energy ventures backed by allies.

China Huanqiu Contracting and Engineering Corporation, an affiliate of government-run China National Petroleum Corp., notified the Sinovensa joint venture it has suspended work to expand a crude blending facility by 57% to 165,000 barrels a day, according to a document seen by Bloomberg and a person familiar with the matter.

That’s in contrast to comments from state-controlled Petroleos de Venezuela SA last month announcing a second expansion to take output to 230,000 barrels a day at the project, which is jointly owned by PDVSA and CNPC -- China’s biggest energy company.

The halt is another blow for Venezuela, which is increasingly reliant on Russian and Chinese oil companies to prop up an industry struggling against an economic blockade by Donald Trump’s administration. Chevron Corp. and four U.S. oilfield service companies will stop work in the Latin American nation at the end of October unless sanctions waivers are extended, potentially affecting nearly half the drilling rigs operating in the country.

A project manager at HQC -- as the Chinese contractor is known -- said in a notification to Sinovensa it was owed more than $52 million in invoices dating back to 2018, and that it was suspending activities from Sept. 3. The JV is a key project in Venezuela’s Orinoco region that boasts the largest oil reserves on the planet and currently accounts for about half of the country’s remaining production.

To contact the reporters on this story: Patricia Laya in Caracas at playa2@bloomberg.net;Peter Millard in Rio de Janeiro at pmillard1@bloomberg.net;Lucia Kassai in Houston at lkassai@bloomberg.net

To contact the editors responsible for this story: Tina Davis at tinadavis@bloomberg.net, Pratish Narayanan, David Marino