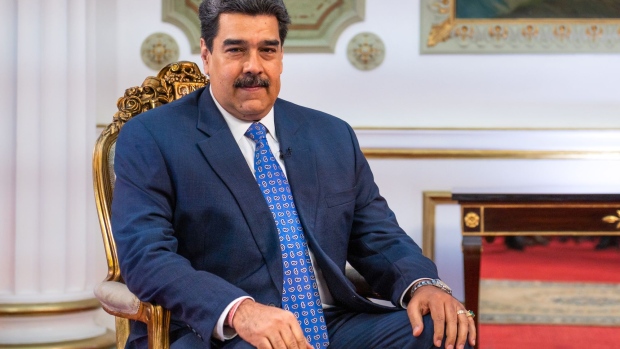 (Bloomberg) -- Members of Venezuela’s opposition said they are open to a new round of political negotiations with President Nicolas Maduro’s government ahead of upcoming local elections, but cautioned that agreement on the terms of the talks has not been reached.

The two sides appeared to be moving closer to planning to hold meetings in Mexico, after Maduro declared the government was ready to negotiate.

“We are ready to go to Mexico, sit down with a realistic, objective and truly Venezuelan agenda to reach partial agreements for peace, so that all criminal sanctions are lifted,” Maduro said Thursday afternoon.

The talks, which would be mediated by a delegation from Norway, are aimed at setting conditions for nationwide mayoral and gubernatorial elections scheduled for November, and for future votes, including the 2024 presidential election. The November vote is seen as a key test for Maduro as he attempts to win back international recognition and convince the U.S. to ease economic sanctions. Foreign governments, including the U.S., have called on Maduro to hold free and fair elections.

Jorge Rodriguez, a top Maduro lieutenant who is leading government efforts to strike a deal with the fractured opposition, said that they are moving forward in negotiations with all groups, including the one led by Juan Guaido.

Guaido, leader of the opposition’s national assembly, has yet to commit to the talks, but appeared more open to the idea in a television interview on Wednesday.

“We are now ready as a democratic alternative to achieve a solution to the conflict, to reach an agreement,” he said on RCN television. “Understanding that we are facing a dictatorship, we are going to insist on reaching an agreement, we hope so. Not only a negotiation, but an agreement that ends the conflict that Venezuela is going through.”

Some opposition members warned that they have yet to receive a number of guarantees from the government, such as lifting the ban on several potential candidates, many of whom are in exile.

“Maduro’s words are a good sign, but the negotiation is not clear yet. I don’t think a negotiation is imminent. I believe that conditions can be improved,” said Stalin Gonzalez, an ally of former opposition presidential candidate Henrique Capriles. “I believe that negotiations must begin before the elections. I think we always have to bet on a deal. We need to participate in the vote to have more strength at the negotiating table.”

A time line for the potential talks is unlikely to emerge until parties register candidates in August. The opposition is also looking for signals from a delegation of European Union technicians who have been holding talks in Venezuela for the past two weeks about whether to deploy an electoral observation mission in November.

“If the EU decides to come, it is an endorsement that in Venezuela conditions can be met according to an international democratic standard,” said Roberto Picon, one of five rectors on the electoral council, in a statement. He added that an agreement will ultimately depend “on the political actors.”