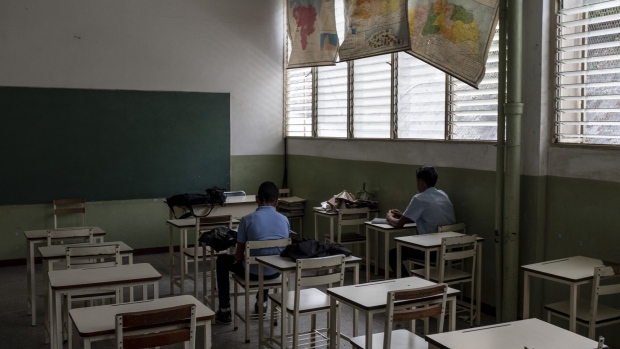 A generation of Venezuelan children is missing the chance for an adequate education amid mass absenteeism, decaying buildings and an exodus of qualified teachers. Education was a priority for the government of President Hugo Chavez, who boosted spending on public schooling and expanded literacy programs for the poor. When Chavez took office in 1999, he pledged to eliminate illiteracy in the country.

Twenty years into the nation’s socialist experiment, classrooms are half-empty as the school system falls apart amid a spiraling economic crisis and hyperinflation.

At the Unidad Educativa Estatal Cecilio Acosta an hour outside Caracas, the stench of sewage pervades unlit corridors and paint peels off the walls. The main building floods several times a month, and pupils must evacuate when it rains. The cafeteria is shut, because it’s next to an open sewer after flood water collapsed the plumbing system last year. The kindergarten, for 3-to-6-year-olds, is abandoned because of the deluge. The whole school has fewer than 10% of the students it should have, according to elementary teacher Nayibe Moreno.

``The students adapt to the conditions as they are,” she said. “It's really very difficult for them to go elsewhere, because of their economic circumstances.''

The teachers have to adapt, too: She earns $8 a month.

The school, which is in the satellite city of  Los Teques and is named for a 19th-century writer, has no security staff, and thieves come and go as they please through a hole in the wall. In September, they stole the water pump, leaving students dependent on deliveries from a truck to slake their thirst.

The crisis became particularly acute with the onset of hyperinflation, which eroded teacher salaries to almost nothing, said Leonardo Carvajal, professor of education policy at Andres Bello University in Caracas. Fully qualified teachers in the state system often don’t earn enough to cover the costs of getting to and from work.

“The desertion of teachers is such that often they don’t even bother to formally resign, they just go,” he said; only those with a deep love of the profession still show up for work.

The basketball court is overgrown with weeds, amid a lack of spending on maintenance.

“This school used to be among the best,” Moreno said, adding that it was a training center for teachers.

Read more: Venezuela’s ‘University of the Future’ Is Dry and Crumbling

Cecilio Acosta has 159 students enrolled this academic year; it once had 1,700, she said. Because of the flooding, it is an extreme case, but absenteeism has risen sharply across the entire system. In the far west of Venezuela, thousands of children cross the border at dawn to study in Colombia.

The number of out-of-school children of primary-school age rose to 325,000 in 2017, according to data collected by UNESCO. That’s double the figure from 2013, the year Chavez died. The number of out-of-school adolescents of secondary-school age rose 46%, to 481,000. Teachers who spoke with Bloomberg said the absenteeism rates have increased since then.

Many parents say they can’t afford transport to school or school uniforms. Nutrition programs also are a shadow of what they were, according to Carvajal. At Cecilio Acosta, the children eat what is available and sometimes have the same menu for weeks on end. It is heavy on starch—rice, arepas, plantains—and there is little protein. They're sometimes given a substance called sardine mortadela, a sausage made of mashed fish that provokes rebellion in those who must consume it.

“A child has be well-nourished to to be able to learn,” Carvajal said.

One consequence of the teacher shortage has been the emergence of so-called “pirate” teachers, Carvajal says. Sometimes as young as 17, they lack the proper qualifications to teach the classes assigned to them. They also lack authority, since they are often barely older than the children they are supposed to be teaching, he adds.

To contact the author of this story: Matthew Bristow in Bogota at mbristow5@bloomberg.net

To contact the editor responsible for this story: Stephen Merelman at smerelman@bloomberg.net, Melinda Grenier