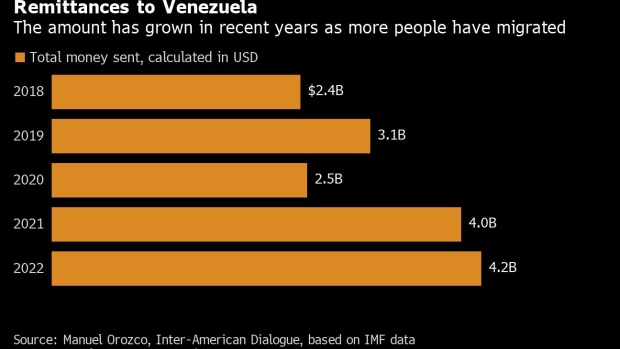 Venezuelan migrants at a makeshift encampment near the Rio Grande in Ciudad Juarez, Mexico, on Sunday, Nov. 13, 2022. Poverty in Venezuela fell for the first time in seven years and the migration crisis showed signs of flattening out, according to an independent, nationwide survey of living conditions known as Encovi. , Bloomberg

(Bloomberg) -- Venezuela’s growing migrant community in the US and its lack of formal money transfer services are an incentive for remittance companies to operate in the country, according to the Inter-American Dialogue.

Transfers from the U.S. account for 38% of the approximately $4.2 billion in remittances this year, but only 3% of the money is being sent through formal remittance channels, a new report by the Washington-based think tank shows.

In just four years Venezuela has become a major remittance-depending country, according to the report seen by Bloomberg News. About 29% of Venezuelan households receive money from abroad as over 7 million people have left the country.

The remittance marketplace has remained informal after Venezuela severed relationships with foreign banks and because of prior currency controls. But conversations around easing US sanctions and the government’s embrace of the US dollar for everyday transactions represent an opportunity for businesses, even if these changes take some time, IAD analyst Manuel Orozco told Bloomberg News.

“As long as there is a signaling of sanctions easing in the context of political negotiations, the incentives for the business sector to do business will increase,” Orozco said. “That’s basically what you’re looking at in 2023.”

Venezuela’s financial inclusion is among the highest in the region, with 80% holding bank accounts, and yet most migrants turn to unlicensed routes to send money.

The tech savvy depend on cryptocurrency, and a limited number of people turn to third parties with access to payment apps such as Zelle or Airtm, or even depend on bringing physical cash into the country. Others find go-betweens willing to trade dollars in a foreign account for cash or bolivars.

--With assistance from Nicolle Yapur.