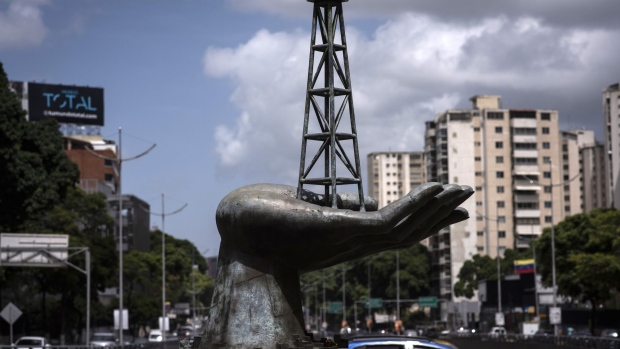 A sculpture, depicting an oil derrick in a hand, outside the Petroleos de Venezuela SA (PDVSA) headquarters in Caracas, Venezuela, on Wednesday, Aug. 31, 2022. Venezuelan Oil Minister El Aissami made a request through the prosecutor's office for the extradition of ex-minister, Rafael Ramirez, for allegedly defrauding state oil company PDVSA. , Bloomberg

Petroleos de Venezuela SA took over the 40% stake in the Petrozamora venture over the past month and replaced the board of directors after notifying GPB with a letter, according to four people with direct knowledge of the matter, who aren’t authorized to speak publicly.

It’s unclear if GPB was offered compensation or if it’s in negotiations with PDVSA after being notified of the changes in the project. GPB had operational control of the venture which is rare in Venezuela, including managing the finances of the partnership.

While GPB is a closely held company incorporated in the Netherlands, it is led by Vladimir Shvarts and two former executives at Moscow-based Gazprom PJSC, Boris Ivanov and Sergey Tagashov, both of whom worked for the Russian government in the past.

Last week, PDVSA installed Erick Perez as the new head for Petrozamora and a first board meeting was held without the GPB officials, the people said. Perez also serves as vice president for exploration and production, vice minister for oil and head of the government’s affiliate that partners with foreign firms in ventures.

The local GPB subsidiary is known as Gazprombank Latin America Ventures. GPB acquired the stake in Petrozamora from Russia’s Gazprombank in 2019. Back in 2013, Gazprombank said it would invest $1 billion in the project, a year after entering into a 25 year contract with PDVSA.

Venezuela’s oil industry is struggling to stabilize production around 700,000 barrels a day after sanctions and a string of departures by foreign companies including Rosneft Oil Co., Equinor SA and drillers Baker Hughes Co. and Halliburton Co. The South American country produced as many as 3.4 million barrels in 1998.

In taking over Petrozamora, PDVSA is aiming to increase supply for its domestic market, sending production from the field to its largest refinery, the Paraguana Refining Complex some 200 miles north, according to one of the people.

The project is in Venezuela’s oil cradle in the western state of Zulia, and used to supply about 10% of the country’s output using modern rigs rarely found elsewhere in the country. Production at the field dropped to around 28,000 barrels a day from roughly 120,000 barrels a day six years ago as US sanctions made it harder for the venture to find buyers for the crude.

In its heyday, the venture supplied crude to the Nynas refinery in Sweden, which PDVSA controlled. After US sanctions hit PDVSA in 2019, Nynas was targeted too. A restructuring followed and PDVSA reduced its stakes and halted shipments from Petrozamora.

Both PDVSA and GPB are sanctioned by the U.S. Office of Foreign Assets Control.