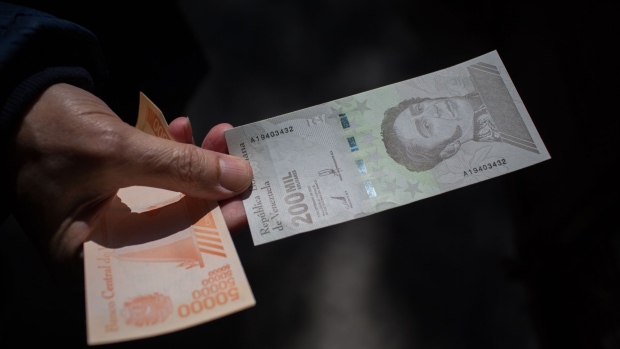 A person holds a 200,000 bolivar banknote outside a bank in Caracas, Venezuela, on Monday, March 15, 2021. Venezuela began circulating new 200,000, 500,000 and 1,000,000 bolivar notes as hyperinflation renders most bills worthless, forcing citizens to turn to the U.S. dollar for everyday transactions. Photographer: Manaure Quintero/Bloomberg , Bloomberg

(Bloomberg) -- Venezuela will remove six zeros from the bolivar in another attempt to save a currency that has been wracked by one of the longest episodes of hyperinflation in history.

The central bank said it plans to print new bills that will go into circulation Oct. 1, while encouraging Venezuelans to use a digital version of the currency to simplify daily transactions. The currency will be branded the “Bolivar Digital,” the bank said in a statement posted on Twitter.

President Nicolas Maduro’s government has vowed to protect the use of the bolivar even as it has allowed widespread adoption of the U.S. dollar, a move that has helped ease shortages in stores. Bloomberg’s Cafe con Leche index, a measure of inflation, has registered a 2,575% rise over the past year. Although the dollar is preferred by most in the country, bolivars are still needed for everyday transactions, like for bus fares and to pay at gas stations that receive government subsidies.

The government has made similar adjustments to the bolivar before, having cut eight zeros since 2008, not including Thursday’s decision. Still, inflation and depreciation have eroded its purchasing power, forcing individuals and businesses to engage in complex operations to carry out simple transactions, as accounting and payment systems collapse from the overflow of digits.

While it will print physical money, including new bills of 5 to 100 bolivars, the central bank is attempting to move toward a digital economy with introduction of the digital bolivar, it said. The largest bill will be worth roughly $25 under the current official exchange rate.