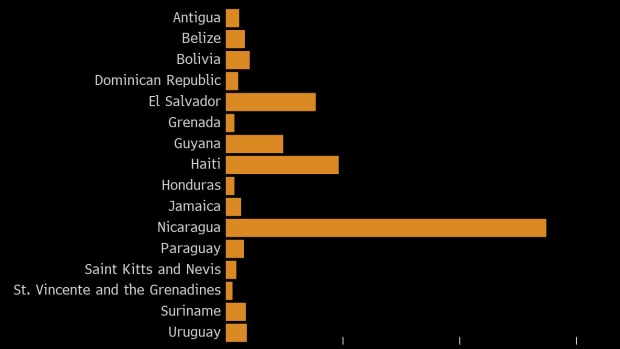 (Bloomberg) -- Venezuela’s state oil company is pushing to revive a defunct energy pact with the Caribbean under different terms as it seeks markets that are willing to pay cash for oil and refined products.

Petroleos de Venezuela SA is lobbying island governments to negotiate terms for the new shipments under a revived Petrocaribe agreement, according to a person with knowledge of the matter. The pact was abandoned four years ago as Venezuela slid into economic catastrophe, oil production dwindled and Petrocaribe members ran up massive debts for the shipments. Today, Venezuela still struggles to provide enough fuel for its own citizens.

A first shipment of as much as 23,000 barrels of diesel will be delivered by month’s end to Saint Vicent and the Grenadines, according to Ralph Gonsalves, the nation’s prime minister and a longtime political ally of Venezuela’s Socialist leaders. The countries are working out storage logistics and plans for future shipments, which may include urea fertilizer and asphalt, Gonsalves said this week in a national address.

Nations throughout the Caribbean have been publicly calling on the US to ease sanctions on Venezuela, and allow it to resume its cheap-oil diplomacy at a time when the region is getting hit with soaring energy costs. Deals between Venezuela and other governments in the region are still being negotiated, the person said.

Late President Hugo Chavez struck energy agreements across the region, including Petrocaribe, as part of his ambitions to spread geopolitical influence using petro-dollars.

The country, which sits atop the world’s largest proven reserves, sent oil and refined products to 17 countries, principally in the Caribbean and Central America, under preferential terms. They paid for a certain percentage up front and financed the rest over 25 years, often repaying in-kind with products such as black beans and blue jeans.

By 2019, recipients of Venezuelan oil under the agreements had racked up nearly $6.5 billion of debt, according to a tally by economist Francisco Rodriguez, which excludes Cuba. While Venezuela’s oil industry has undergone a slight rebound over the last year, its production of 670,000 barrels a day is a fraction of the roughly 2.5 million barrels a day it was pumping when Petrocaribe was launched.

President Nicolas Maduro has repeatedly vowed to restart the program, which gave Venezuela clout at regional and international bodies, such as the Organization of American States. The government has not released details of the terms it will seek.

“Sooner rather than later we will recover Petrocaribe’s investment capacity so that it fulfills its historic role as a factor of social justice and stability in Latin America and the Caribbean,” Maduro said this year.