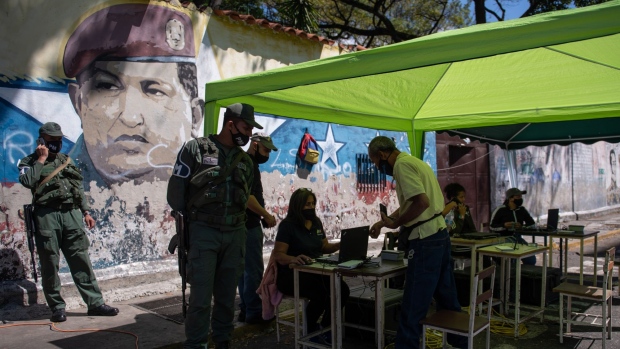 Officials collect signatures from residents for a referendum against the government in the Petare neighborhood of Caracas, Venezuela, on Wednesday, Jan. 26, 2022. Venezuela’s National Electoral Council, known as the CNE, collected signatures that could trigger a referendum to remove President Nicolas Maduro. , Bloomberg

(Bloomberg) -- An attempt to force a referendum to recall Venezuelan President Nicolas Maduro appeared to fall flat on Wednesday, with signature-collection centers in Caracas and elsewhere largely bereft of voters.

The National Electoral Council opened 1,200 sites Wednesday morning where citizens could sign. But five centers in the capital visited by Bloomberg News had queues of three people or fewer. Images on social media showed a similar picture in other regions of the country.

At least 20% of voters in all 23 states plus the capital need to approve the measure for the CNE to call a nationwide referendum that would give voters the option to oust Maduro. The electoral authority will announce the results on Feb. 13 after an audit of signatures.

If the signature drive falls short, voters won’t have another chance to remove Maduro until elections scheduled for 2024. Maduro, who took over in 2013 after the death of Hugo Chavez, has won two elections, the most recent of which was beset by widespread claims of fraud. The economy has only recently emerged from a seven-year recession and a period of hyperinflation. Maduro’s approval ratings have fallen to 20% in recent polls.

The referendum recall was requested by small opposition groups and snubbed by most of the largest political parties. Organizers said the government set the process up for failure. The date was set just five days ago, giving them little time to launch campaigns and reach potential voters.

“I didn’t know anything about this process. Are they trying to kick Maduro out of the presidency?” said Pedro Arabia, a 67-year-old retiree in El Hatillo, a suburb of Caracas. The makeshift CNE center a few feet away was empty. As of early afternoon, electoral workers said they hadn’t received a single voter in more than two hours.