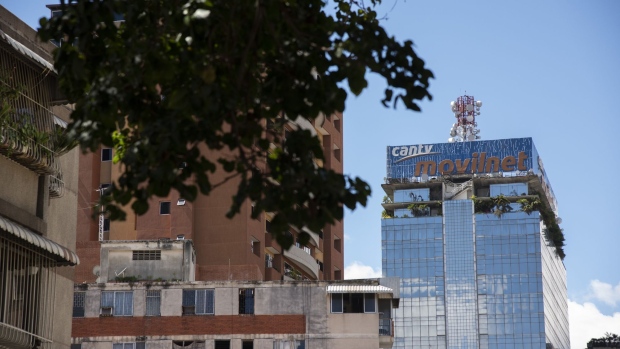 A pedestrian views a mobile device while passing in front of a Compania Anonima Nacional Telefonos de Venezuela (Cantv) service center in the Chacao district of Caracas, Venezuela, on Saturday, Dec. 8, 2018. Documents indicate that there have been at least 2,000 attacks on Venezuela's network of 6,000 antennas in the last last three years, a popular crime in the crumbling nation. The number includes incidents of vandalism -- picking the equipment for parts, which can be resold -- and outright theft. , Bloomberg

(Bloomberg) -- Shares in Venezuela’s state-owned telecommunications company soared this week in Caracas as the government announced plans to offer stakes in public companies, boosting expectations for a revival in the local market.

Cia. Anonima Nacional Telefonos de Venezuela SA, or CANTV, surged 41% in two days, according to Caracas Stock Exchange data, after President Nicolas Maduro said his government was going to list 5% to 10% of the shares of public companies for national and international investment.

Maduro made comments in a televised evening address Wednesday, mentioning CANTV, a state-owned petrochemical company, and oil and gas joint ventures as examples of companies that could soon start to raise capital. Offerings would start as soon as Monday, Maduro said, without adding further details.

“These shares are rallying on the expectation that the government is going to start privatizing state-owned companies and that it’s going to do so in a more transparent, institutional way through the stock exchange,” said Jose Miguel Farias, an independent local investment adviser and broker. “Despite the lack of information, for many investors with an appetite for risk, it’s worth accumulating positions in these state companies hoping that, in the long run, that leads to them discovering their real value.”

The announcement could mean a historic shift in Venezuela’s socialist economic policy, where years of currency and price controls, expropriations and corruption led the country to one of the longest bouts of hyperinflation in history and a seven-year recession. As the crises deepened, Maduro has been forced to ease restrictions and allow an unofficial dollarization, which has helped breathe new life into a dormant market.

On Friday at a meeting with the foreign press, Caracas Stock Exchange President Gustavo Pulido said the bourse hadn’t been informed of any new authorization for public listings. Even if they receive notice by Monday, it would take them at least 48 hours to prepare an offering, Pulido said.

CANTV said there was no significant event to notify the market that explained the increase in the stock price. “We presume that the stock movement in the price of CANTV’s shares is a product of the president’s announcement,” CANTV’s corporate affairs manager, Helen Hernandez, said in a letter to the exchange published Friday.

The plan may be in its early stages, and attracting foreign investors remains tricky as economic sanctions imposed by the US continue to block dealings with government-controlled firms. But local investors embraced prospects for development of the capital market.

For CANTV, there are positive expectations about potential investments it could receive through the exchange, said Juan Domingo Cordero Osorio, president of local brokerage Rendivalores Casa de Bolsa.

More broadly, “a company that is listed in the stock exchange is regulated and supervised,” he said. “Investors see this as positive, as it gives them greater security in their investments.”