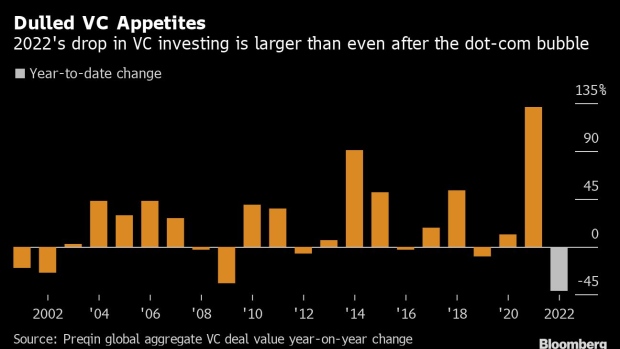 (Bloomberg) -- Venture capital investments are on track for the sharpest drop in more than two decades this year, surpassing the declines of the dot-com crash and the financial crisis amid rising interest rates, macroeconomic uncertainties and a public market downturn.

The value of new VC deals globally is down 42% in the first 11 months of this year compared to last, to $286 billion, according to research firm Preqin. That’s the deepest slump the researchers have recorded yet, surpassing the nadirs of the early 2000s and the 34% collapse after the 2008 financial crisis.

Venture capitalists, who ratcheted up spending over the last decade, are pulling back after rising interest rates put a premium on capital and challenged the tech industry’s growth-at-all-costs mindset. Deal activity dropped sharply in the two biggest venture markets, with declines in aggregate deal value of 50% in China and 45% in the US so far this year.

“The tides are changing,” said Evan Thorpe, principal at SixThirty Ventures, a US firm that invests globally in early-stage startups. “We’re seeing a big comedown from the peaks of last year.”

Several of the biggest startup backers have retreated after high-profile troubles at their portfolio companies. Sequoia Capital, one of the giants of Silicon Valley, plunged into crypto this year with a new $600 million fund — only to see the effort backfire with the blowup of the FTX exchange. The firm wrote off the full value of its investment in FTX, as did SoftBank Group Corp. and Tiger Global Management, the two most aggressive supporters of new technology in recent years.

Read more: ‘The Reset Has Arrived’ for the Technology Industry, VCs Warn

Another factor is a mismatch in expectations. Venture firms are unwilling to invest at the lofty valuations of years past after a correction in public markets, while many founders are holding out for better terms.

“There’s a pricing gap between buyers and sellers,” Yan Guo, principal at global alternatives investor LGT Capital Partners, said on a recent panel. “Many private companies are still held at 2021 valuations, while public comparables have corrected significantly this year. As a result, buyers would require a steeper discount, but many sellers are not ready to embrace this reality.”

The US has tried to tame rising inflation through a series of interest-rate hikes this year that have rapidly cut the easy funding of recent times. Startups around the world are being asked to show a clear path to profitability, in many cases sooner than they had previously planned for.

“The market is de-risking overall,” said David Chang, founding partner of Hong Kong-based Mindworks Capital. As interest in volatile sectors like crypto and blank-check companies has dried up, limited partners at VC outfits are looking for surer bets. “Most LP and capital are on the sideline and waiting for signals for any correction.”

China’s venture landscape has been disrupted by a multiyear regulatory crackdown on the tech sector and severe lockdown measures to limit the spread of Covid-19. Abrupt restrictions on movement in and around big cities have hampered regular economic activity and business across industries in the country. China-focused fundraising dropped by 81% this year, according to Preqin.

Venture capitalists tend to be optimistic about the long-term, however. This downturn is sure to be temporary and may end up benefiting the tech ecosystem by ushering in more realistic expectations, said Edith Yeung, partner at Race Capital.

“The worst time could be the best time to invest in tech,” she said. “I am bullish on overall early-stage tech startups and technology advancement.”