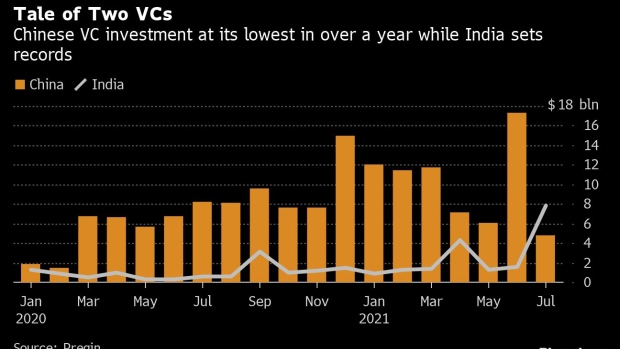 A Zomato Ltd. delivery rider travels along a road in Mumbai, India, on Friday, July 16, 2021. Zomato $1.3 billion initial public offering was fully subscribed on the first day of sale, after anchor funds including BlackRock Inc. bid for 35 times more stock than was offered to them. , Bloomberg

The value of venture deals in India surged to $7.9 billion in July, while China investments plummeted to $4.8 billion, according to data compiled by research firm Preqin. That’s the first time the South Asian nation has surpassed its larger neighbor on a monthly basis since 2013, the firm said.

Caveats apply: One month of data may have limited significance since venture deal-making tends to be lumpy with bursts of activity followed by periods of lull. China had already topped $65 billion in the first half of the year, suggesting its total for 2021 will likely exceed India’s.

Still, the countries appear to be moving in opposite directions. Xi Jinping’s administration has unleashed a series of crackdowns on private companies in technology and beyond, spooking investors about prospects for the future. India’s startups are going public to fervent demand -- food-delivery app Zomato Ltd. has soared about 75% since its debut eight days ago -- signaling the opportunity for profit.

“Global investors are increasingly excited about the potential for Indian companies competing in India and in other markets around the world,” said Anis Uzzaman, chief executive officer and general partner at Pegasus Tech Ventures, based in San Jose, Calif.

The July total for India was boosted by a $3.6 billion funding round by Flipkart, the e-commerce giant controlled by Walmart Inc. The investment valued the business at $37.6 billion, as it prepares for a potential IPO in 2022. China saw a flurry of deals in June just ahead of the decline.