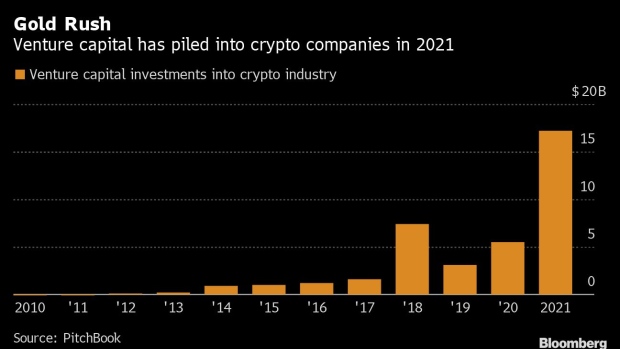 (Bloomberg) -- For a sense of just how big everything crypto has become, you can, of course, just take a look at coin and token prices. And then you can check again five minutes later to see if the space’s notorious volatility has markedly changed the first observation.

But for a more stable measure of the industry’s growth, consider this: venture capital funds have already poured $17 billion this year into companies that operate in the space, according to data provider PitchBook. That’s by far the most in any single year and nearly equal to the total amount raised in all previous years combined.

To be sure, much of that largesse came in a single deal. In May, Block.one, a blockchain software company whose long-time backers include billionaires Peter Thiel, Alan Howard and Louis Bacon injected $10 billion of digital assets and cash into Bullish Global, a new crypto exchange. The company also raised $300 million in an additional funding round at that time.

That investment alone would have made 2021 the biggest year for venture capital investment in the space on record.

But even ignoring that capitalization of a new exchange, the remaining $7.2 billion that has flowed in would already be on par with the previous record of $7.4 billion raised in 2018 with six months still to go in the year.

Ledger SAS, the maker of hardware wallets for Bitcoin and other cryptocurrencies, had the second biggest haul so far this year when it raised $380 million from backers led by 10T Holdings.

“I’m of the opinion that everyone will own crypto, it’s just a matter of what price they get in,” said Ian Rogers, Ledger’s chief experience officer. “We’re still at the protocol phase, we know that there’s something here, you just can’t picture what it’ll exactly look like. For Ledger, we’re definitely not at the selling an iPod at Target moment yet.”