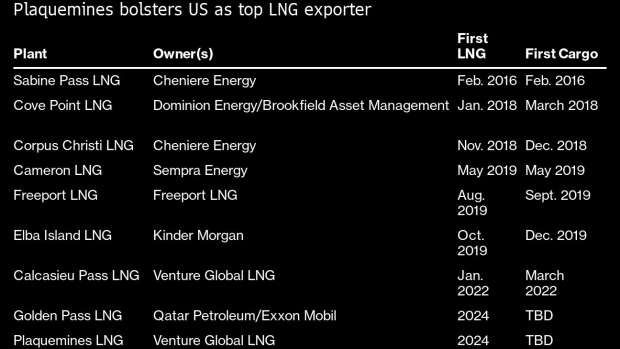 (Bloomberg) -- Venture Global LNG is moving ahead with a second liquefied natural gas export terminal on the Gulf Coast after arranging $13.2 billion of financing, a move that will help support the position of the US as one of the biggest suppliers of the fuel as demand booms.

The Plaquemines project is getting a boost from European customers that are competing with established Asian LNG buyers as they try to replace supplies from Russia. Plaquemines has secured purchases from France, Poland, China and Malaysia. Venture Global commissioned Calcasieu Pass, its other terminal, earlier this year.

The final investment decision sets off a race to become the eighth US LNG export terminal between Plaquemines in Louisiana and Golden Pass LNG, which is being developed by Qatar Petroleum and Exxon Mobil in Texas. Construction at Golden Pass started in 2019 and the plant is expected to produce first drops in 2024. Venture Global, meanwhile, uses a modular approach where components are made in factories and assembled on site.

Touted as time- and money-saver, the modular approach allowed Venture Global to produce first drops of LNG at Calcasieu Pass within a record 29 months.

“I’m very confident that we will be up and producing LNG very quickly” at Plaquemines, said Venture Global Chief Executive Officer Mike Sabel in an interview. Compressors and other equipment for the project are already being made in factories. “So, we’re on a good path.”

The final investment decision comes as US natural gas prices are surging above $9 per million British thermal units for the first time since 2008 and concerns about a supply crunch are intensifying.

Bank of America, Goldman Sachs, ING, JP Morgan, Mizuho, Morgan Stanley and RBC served as lead banks to Venture Global on the transaction, according to a statement.