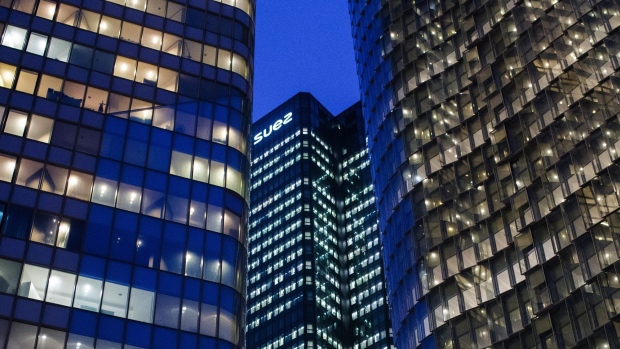 The headquarters of Suez SA and illuminated skyscraper office widows at dawn in the La Defense business district in Paris, France, on Monday, Jan. 4, 2021. France is doing all it can to avoid a third Covid-19 lockdown, which would further hurt an economy already battered by the coronavirus pandemic, according to Budget Minister Olivier Dussopt. Photographer: Nathan Laine/Bloomberg , Bloomberg

(Bloomberg) -- A temporary suspension of Veolia Environnement SA’s hostile bid for Suez SA was lifted on Tuesday, removing one of several hurdles to the company’s takeover plans.

The Nanterre Commercial Court ruled on Tuesday that it was not competent to address a request from Suez to temporarily ban Veolia’s takeover offer, according to a statement. The decision didn’t address the fundamentals of Suez’s case, but nonetheless gives a boost to Veolia’s effort to create a global giant in waste and water services by absorbing its French rival.

Neither Suez nor Veolia were immediately able to comment on the ruling.

The two French utilities have been in a bitter stalemate since Veolia announced its intention to acquire Suez last year. A hostile takeover is a rare thing in France and the battle has tested the bounds of the country’s corporate culture, with unions describing Veolia’s move as a “declaration of war.”

The French Finance Ministry is unofficially mediating talks between the rivals, but with little progress so far as both sides stick to their positions, people with knowledge of the discussions said on Monday. Veolia remains adamant that it wants a full takeover of Suez, which insists it must exist independently after any deal, they said.

The ruling from the Tribunal de Commerce de Nanterre, a court outside Paris, removes one obstacle to Veolia’s plan for a hostile takeover of Suez. The validity of the offer is still being studied by the French market watchdog AMF. The combination of the two companies, whose businesses overlap in many countries, would also be subject to a lengthy antitrust review.