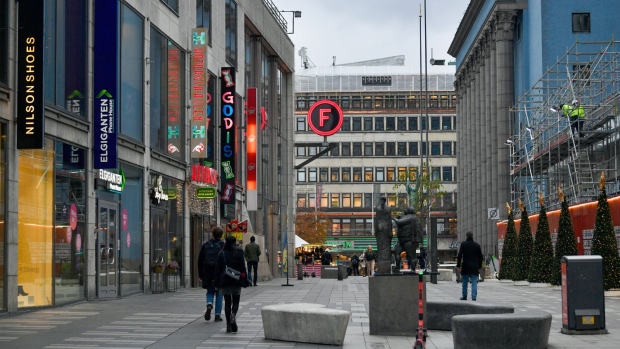 The Sergelgatan shopping street in the city center of in Stockholm, Sweden, on Wednesday, Nov. 11, 2020. The resurgence of Covid-19 across Europe has caught the region off guard after a summer that left many countries assuming they’d brought the virus under control. , Bloomberg

“We can draw from our experience from when we listed Boozt, which was a relatively unknown company on the market at the time and has since then had a very good development,” Verdane partner Henrik Aspen said by phone.

Aspen also says MatHem would benefit from becoming more well-known in Sweden given the online retailer is fully focused on the domestic market.

“And it wouldn’t be good for its underdog appeal if it was acquired by one of the large food retailers,” he said.

In 2019, Verdane agreed to sell part of its shares in MatHem to Kinnevik AB together with the company’s other shareholders. The Swedish investment firm has a 37% stake in the retailer, according to its website, while Verdane holds 16% of the shares.

A representative from Kinnevik declined to comment on its future plans for MatHem.

While the potential listing of MatHem “wouldn’t be relevant for a few years,” Aspen says there are a couple of other portfolio companies under consideration for an IPO later this year or early next. “But no firm decisions have been made,” he said.

That would feed into a wider trend of e-commerce companies getting listed in the Nordic region’s biggest economy, and Aspen expects as many 20 such firms to launch IPOs over the coming two years.

“I think that in a year from now, there will be a number of listed quality e-commerce companies that others can benchmark against, and which will make a listing more attractive,” the financier said.

Desenio shares opened at 85 kronor per share on Thursday, up 18% from the private placement price of 72 kronor that preceded the listing.