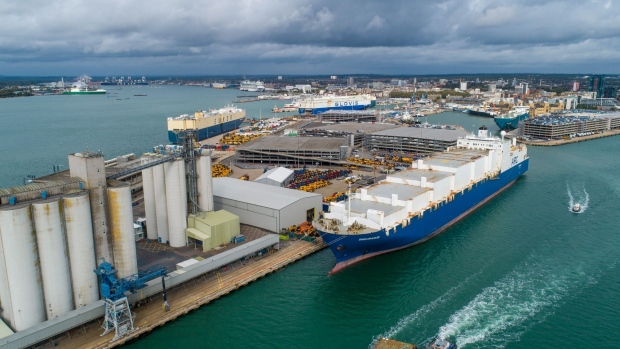 (Bloomberg) -- U.S. carrier Verizon Communications Inc. has won its first industrial 5G deal in Europe, beating out local telecommunications companies and marking an early win in a push to sell the wireless systems to global businesses.

Verizon will build and run a private network for Associated British Ports Holdings Ltd. in Southampton on the south coast of England, and the network will run on equipment from Finland’s Nokia Oyj, the company said in a statement on Thursday. Verizon and ABP declined to share the financial terms of the deal.

New York-based Verizon opened a showroom in London last year and spoke about its hopes to muscle in on 5G enterprise deals beyond the U.S. It’s a sign competition is heating up in the segment, seen as a key way to fuel growth in the otherwise stagnant telecommunications sector for local carriers like Newbury, England-based Vodafone Group Plc.

“We chose Verizon simply just due to the track record within setting up private 5G networks,” said Henrik Pedersen, chief executive officer of ABP, in a video call. “Regional or local, I don’t see it like this. I see 5G as a global thing.”

Southampton is a crucial British terminal which usually handles about 900,000 cars and sees millions of cruise ship passengers per year. It’s upgrading its network as the port adapts to its new status as a freeport, one of several low-tariff business zones on the British coast that U.K. chancellor Rishi Sunak unveiled last month as part of his plans to stimulate post-Brexit trade.

“There’ll be a lot of need for data transfer in the future in the freeport zone, and especially when you start to move goods in and out of the customs zones,” said Pedersen. He said he wants the system up and running by July, and added that more of ABP’s 21 ports are likely to get 5G networks in the future.