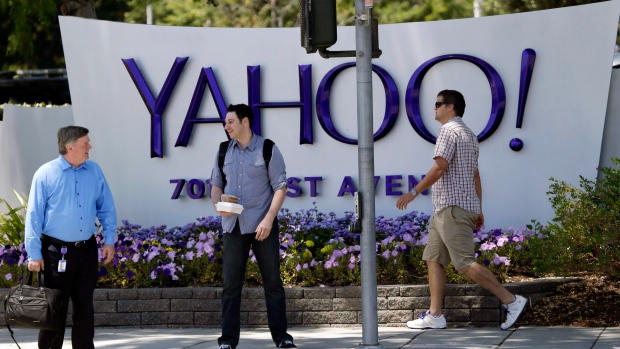 In this June 5, 2014, file photo, people walk in front of a Yahoo sign at the company's headquarters in Sunnyvale, Calif. Yahoo Inc. , The Canadian Press

NEW YORK - Verizon Communications Inc said on Monday it would buy Yahoo Inc's core internet properties for US$4.83 billion in cash to expand its digital advertising and media business, ending a lengthy sale process for the fading Web pioneer.

The purchase will boost Verizon's AOL internet business, which it bought last year for US$4.4 billion, as it gains access to Yahoo's ad technology tools, BrightRoll and Flurry, and search, mail and messenger assets.

"Yahoo gives us scale that is what is most critical here,” Marni Walden, who is head of product innovation and new business at Verizon told CNBC, adding that the company's audience will go from the millions to the billions. "We want to compete and that is the place we need to be."

In a Tumblr blog post, Yahoo Chief Executive Officer Marissa Mayer said she planned to stay at Yahoo, but Walden, who will head the combined company, told CNBC the new leadership team has yet to be determined.

"It's a decade of mismanagement that has finally ended for Yahoo," said Recon Analytics analyst Roger Entner. "It's the continuation of an extension of Verizon's strategy toward becoming a wireless internet player and a move away from (telecom) regulation for Verizon into an unregulated growth industry."

The deal, expected to close in early 2017, marks the end of Yahoo as an operating company, leaving it with a 15 per cent stake in Chinese e-commerce company Alibaba Group Holding Ltd and a 35.5 per cent interest in Yahoo Japan Corp.

Verizon, the No. 1 U.S. wireless operator, has in recent years looked to mobile video and advertising for new sources of revenue in an oversaturated wireless market. It has also scaled back on its Fios TV and internet service.

Verizon could combine data from AOL and Yahoo users in addition to its more than 100 million wireless customers to create data to help advertisers specifically target users based on online behavior and preferences.

Yahoo will continue as an independent company until the deal receives shareholder and regulatory approvals, the companies said.

The Alibaba and Yahoo Japan investments are worth about US$40 billion in terms of their market capitalizations, while Yahoo had a market value of about US$37.4 billion as of Friday's close.

Analysts at Mizuhou said the deal's price tag was largely in line with expectations at US$5 billion.

Under pressure from activist investor Starboard Value LP, Yahoo launched an auction of its core business in February after shelving plans to spin off its stake in Alibaba.