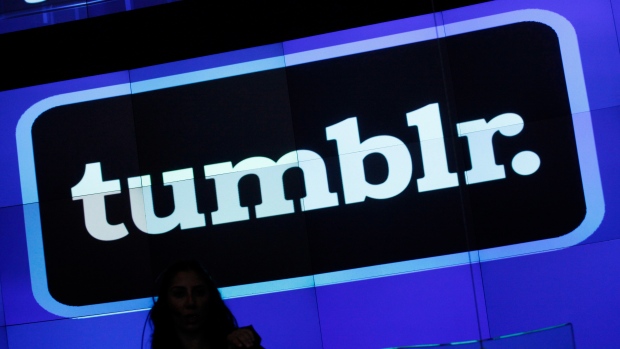 the Tumblr logo is displayed at Nasdaq, in New York , The Canadian Press

Terms of the transaction weren’t material, Verizon said, suggesting Tumblr sold for a tiny fraction of the US$1.1 billion it fetched in 2013. Verizon acquired the site as part of its 2017 purchase of Yahoo.

Automattic already owns a group of publishing sites, including WordPress and Longreads, and sees Tumblr as a good fit. The Wall Street Journal previously reported on the sale, saying that Automattic would take on about 200 staffers.

For Verizon, the sale marks a further retrenchment. It has been cutting staff at its online-media division, which was previously called Oath.

Verizon had originally set out to turn a patchwork of dot-com brands into a thriving online-advertising business, but the strategy never caught fire. And the carrier’s new CEO is refocusing on what the company does best: wireless service.

Last year, it wrote down the online business by US$4.6 billion. That erased almost half the value of the entity, which is also home to AOL and the Huffington Post.